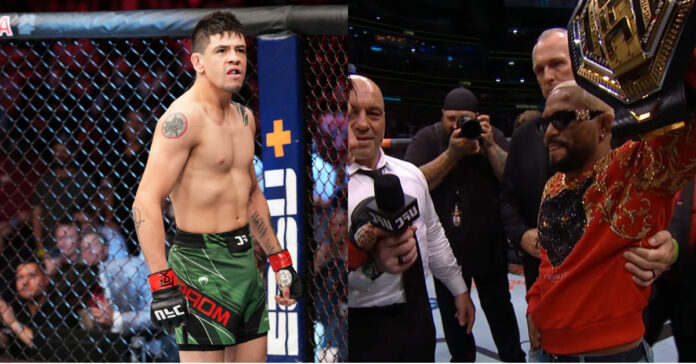 Brandon Moreno opened up about his apology to Deiveson Figueiredo.

This past Saturday, Moreno took on the rising Kai Kara-France for the interim flyweight title at UFC 277 in Dallas, Texas. Moreno went into the bout following three consecutive title outings with the current division champion Figueiredo. Meanwhile, Kara-France racked up a three-fight win streak to get the rematch after losing the first time around on the judges’ scorecards.

Moreno finished Kara-France by TKO (body kick and punches) in the third round to become the interim title holder.

Brandon Moreno opens up on apology to ‘Figgy’

In an appearance on The MMA Hour with Ariel Helwani, Brandon Moreno opened up about his apology to Figueiredo during the post-fight octagon interview.

“I was f**king ready to throw all my hate, all my fury there,” he said. “But man, I don’t know, something came to my mind. What I said in the interview was real.”

While he could’ve spurred drama, he chose not to because of his family.

“I had the option for the world, for the money, for the show, to create some big drama there and do something stupid with Deiveson in the octagon and make everybody crazy.

“Or I had the opportunity to take the long way and be respectful and just say like, ‘man, I forgive you for all the sh*t you’re saying to me, and just please forgive me if I did something bad against you. I did it man I know maybe it was not the best option for fans. But as a man, as a family guy, I took the long way and that’s it.”

Moreno revealed why he apologized

Moreno was alleged by ‘Figgy’ to be racist after one of his teammates used a monkey emoji filter on Figueiredo. He clarified the incident and revealed it as the reason for his apology.

“C’mon man, I’m not a racist,” Moreno added. “All the people know I’m not a racist, definitely. Actually one of my closest people when they heard the history, they started to laugh. They go like, ‘man, no way. you’re not racist.’ I just want to put my ego in another place and just say please forgive me and that’s it. That was the offensive thing I did, I think so.”

Now that Brandon Moreno is the interim champion, a fourth title unification outing with Figueiredo looks likely ahead.