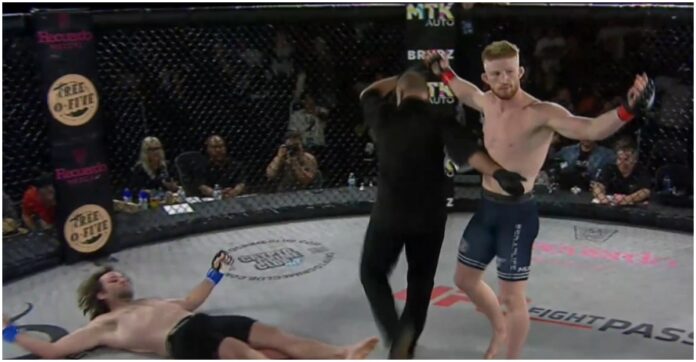 Nickal entered the bout at Jorge Masvidal’s iKON FC 3 event with a ton of hype behind him, and he furthered his stock with his thirty-second debut victory.

From the opening bell, it looked like it was going to be Nickal’s night. The wrestler threw multiple kicks and searched for his target. Still, it was a left from Nickel that stopped Noland in his tracks. Noland, who was stunned, and returned to his feet was met with a beautifully timed uppercut followed by a straight left and a crisp right before dropping to the canvas again, which resulted at the end of the contest.

Bo Nickal made it clear in his post-fight interview that he wasn’t competing in MMA to make up numbers and had his eyes set on the best fighters and promotions in the world.

“Every single middleweight on the planet, I don’t care what organization you’re in, UFC, Bellator, PFL – doesn’t matter, I’m coming for all y’all,” Nickal said post-fight.

“I’m trying to hold it down for all my wrestlers out there,” Nickal continued. “I love y’all, and wrestling’s taking over for sure.”

Nickal, 26, has the backing of UFC welterweight Jorge Masvidal, who first laid eyes on him back in 2014 and was always hopeful Nickal would make the transition from wrestling to MMA. Now it’s here, Masvidal has high expectations.

“I’m putting a lot of weight on him, but he’s kind of like the new future of MMA, in a way,” Masvidal said. “He’s got a great wrestling background, he can’t get held down by nobody, and he grew up watching MMA and wanting to do it. He’s already familiar with striking, he’s not foreign to striking like we saw in his last fight.”

What do you make of Bo Nickal’s MMA debut?