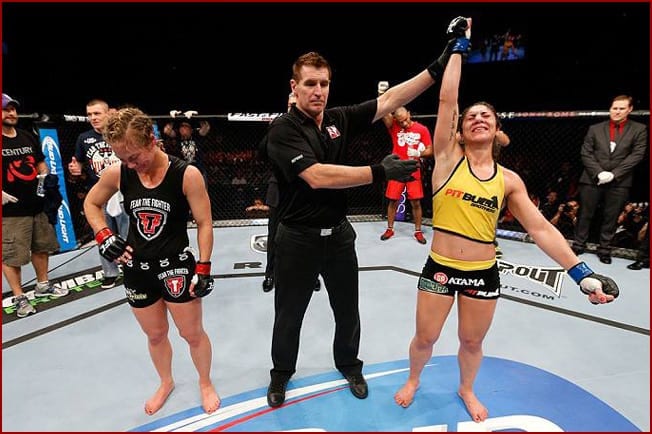 UFC women’s bantamweight champion Ronda Rousey is no stranger to being called out by the promotion’s top talent. Never before though has “Rowdy” been linked to someone like Bethe Correia. UFC 177 saw the Brazilian take out the second of the “Four Horsewomen”, and in rather dominant fashion.

After beating highly touted Jessyman Duke by decision at UFC 172, “Pitbull” returned to action to face the second of Rousey’s “Horsewomen” Shayna Baszler at UFC 177. The result was a great fight, and even better was the result for Correia. She finished Baszler with a flurry of hard strikes for a second round TKO. The women’s bantamweight champion called out Correia in the aftermath of the event, but Dana White put a hold on it.

Just days after the event went down, Correia is quick to make her bid for a shot at Rousey’s belt, as she spoke to MMAFighting.com:

“I needed this. I knew people would look at me as a great fighter with that. I needed this to get where I want, to get to the title. I’m confident. I’m ready to fight for the title. People see me with different eyes today, they see me as a top fighter today. I don’t know what Dana White’s plans are, but I respect his decision. He knows what he has to do. But the only thing I can say is I want to be the champion so bad,” Correia responded. “I know I would give Ronda a great fight. I’m capable of beating Ronda. I know that.”

It’s nothing new to hear a legit fighter claim they can beat the champion. Some contenders go through with their promises, but others end up eating their words in spectacular title fight fails. The question is which category does “Pitbull” fall in to? She continued:

“I’m one of the first women to sign with the UFC, I’m undefeated, and I have the right to ask for this opportunity,” she continued. “I want the title fight. I challenge Ronda Rousey to end my invincibility, because she won’t. I’m the one who will retire as the undefeated UFC champion. My dream is to fight for the title. I want to show the whole world that I’m the UFC champion.”

Having walked through two of Rousey’s stable mates, and added with the shallow nature of the division that Rousey runs, should Correia get a fast track to a title fight. There is already bad blood between Correia and “Rowdy”, and the Brazilian has looked phenomenal in her latest outings.

Either way, I feel like the title shot is a ‘when’ as opposed to an ‘if’ for Bethe Correia. The champion wants the fight, they are both unbeaten, have bad blood and there really isn’t too much happening at women’s bantamweight right now. What do you think?