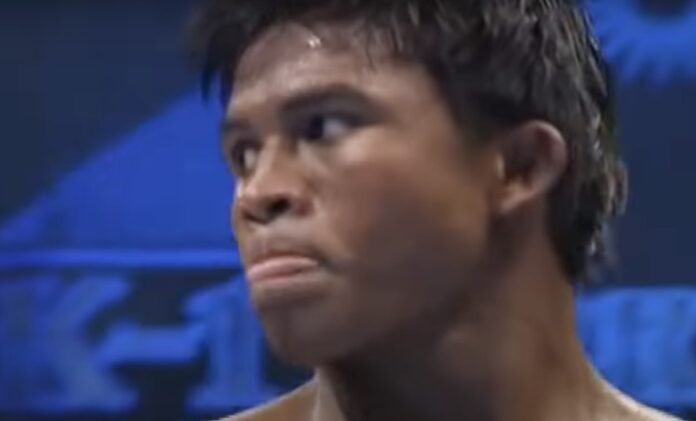 Doing a best Muay Thai fighters list of all time is a daunting challenge for a number of reasons. There’s so many great Thai fighters that you’re liable to forget someone and these types of lists never make everyone happy.

The crew at LowKickMMA got together and after a long discussion came up with this list. These are the 12 best Muay Thai fighters of all time from Thailand.

Below we have detailed the stellar careers of some of the best Thai fighters that have ever competed. Detailing some of their best accomplishments and their legendary styles.

Buakaw Banchamek started training in Thai boxing when he was just 7 years old and went pro at 9 years old. Active for an unheard of 30 years and still hasn’t retired from the sport.

In his time fighting, Buakaw has fought just about all the big names in his career and won many of them. Fighting in 4 different weight classes and winning multiple titles in Thai boxing and kickboxing.

While many don’t consider Buakaw to be the most technical Thai fighter ever, he is one of the most fierce. He has a well rounded game and has knocked out numerous opponents with various strikes.

Thongchai tor Silachai is arguably not only one of the best Muay Thai fighters ever, but maybe the toughest. You don’t get a nickname like the “Great Stone” without being tough as nails.

Silachai started fighting in the early eighties and would fight for 30 years. In this time, he would beat the best in the world and win 6 Muay Thai world titles.

Everything he threw was thrown with bad intentions and he wasn’t afraid to take a shot to land one. Thongchai is also one on a very short list of fighters that has a KO win over the great Saenchai.

The Emperor was a fixture in Thailand fighting in all of the big stadiums during a 15 year career. During this time, Namsaknoi Yudthagarngamtorn was considered the best lightweight fighter in the world.

He would win 8 Muay Thai championships and voted fighter of the year multiple times. Namsaknoi was known for his incredible clinch game, jab, and relentless roundhouses that won him 280 fights.

Also going undefeated from 2000-2006 in fights held at the Lumpinee stadium. At the end of his career, Namsaknoi would have a dispute with his manager and was left broke.

But things turned around for the emperor and he has found a second life as a revered Muay Thai coach.

He had an aggressive style of throwing fast flurries at his opponents, which made him a fan favorite. This style would help Sagat earn 4 Muay Thai world championships and 1 kickboxing championship during his career.

Sagat is also allegedly the inspiration for the Street Fighter character by the same name Sagat. A character that is proficient at Muay Thai and rather resembles Sagat, who also had a run in with the law.

Petchyindee will be remembered forever as one of the best Muay Thai fighters ever and through the video games.

The ageless wonder Saenchai has been on top of the sport of Muay Thai for an unheard of 5 decades. What is crazy about Saenchai is that he has gotten even better with age.

Saenchai isn’t your run of the mill Muay Thai fighter as he has a style that is all his own. A style kinned to that of Floyd Mayweather in boxing favoring a precision game over a power game.

He is a master of range and precision, which leaves his opponents dumbfounded. At times, he looks more like a magician than a fighter as he takes his opponents where he wants.

Then when he is ready, Saenchai delivers a knockout blow. In his career, Saenchai has won 18 Muay Thai championships and looks to add more to his resume before he retires.

The golden leg Pud Pad Noy Worawoot was a beloved fighter during the 1970s and 1980s. Arguably one of the best southpaw Thai fighters that ever lived.

Long before Cro-Cop even trained, Pud Pad was known for having the most devastating left leg in Muay Thai. He would blast through his opponent’s guards and throw at full force non stop during his fights.

His relentless kicking style would earn Worawoot 5 world titles during his fighting career. Then when Pud Pad retired, he became a highly respected Muay Thai coach.

He coached throughout the US and Paris before returning to coach in his home of Thailand.

Towering over his opponents at over 6ft tall was one of the best Muay Thai fighters ever in Dieselnoi Chor Thanasukarn. Dieselnoi was the king of the lightweight division during the golden era of Muay Thai in the 1980s.

He had a devastating knee and clinch game that is considered one of the best ever. Thanasukarn’s knees seemed like they could hit his opponents from across the ring..

In 1981, Dieselnoi would win the Lumpinee Stadium Featherweight title and held it for 4 years before retiring. He was actually sort of forced into retirement after cleaning out the entire lightweight division and had no one to fight

Mr Sky Piercing Knee is an all time great and was a fan favorite during Muay Thai’s golden age.

The “computer knee striker” Chamuekpet Harpalang comes in at #5 on our best Muay Thai fighter list. Harpalang’s nickname was a perfect fit, because he was like a computer program with his knee strikes.

He had an all time great mid-range striking game along with great defense and footwork. Making his opponent’s chase him until they came into striking range for him to land vicious knees and elbows.

Chamuekpet would fight for twenty years and in over 6 different weight classes. Winning 9 Muay Thai titles and a featherweight title in pro boxing.

You couldn’t ask for a better career than what the computer knee striker had. Definitely an all time great fighter.

Petchboonchu FA Group is considered to have the best clinch game of the modern era of fighters. He first began fighting when he was 7 and would keep fighting until he was 28.

FA Group was never one to shy away from a dog fight and loved to press forward and initiate clinches. Unleashing perfect sweeps and nasty elbows and elbow strikes on his opponents.

A classic Muay Khao style of Thai boxing he would use to win 14 Muay Thai titles at multiple weight classes. FA Group is now retired and works for One Championship recruiting Thai boxers.

The third spot on our best Muay Thai fighter list is the late, great Apidej Sit-Hirun. Known as the “Kicker from Bang Nok Khwaek ” was an icon of his generation.

Sit-Hirun was active from 1958-1976 and was adored by many Thai boxing fans, which included the King of Thailand. Many consider Apidej to have had the best roundhouse kicks in all of Thai boxing with knockout power in both legs.

His kicking ability would lead him to dominate the welterweight division and earn 5 Muay Thai championships. He was also an accomplished boxer and was a 3x Thai boxing champion.

Sadly, Apidej Sit-Hirun passed away in 2013 from lung cancer, but he inspired many future legends to start training. He was a trailblazer and deserves more recognition.

Some may dispute having a fighter that never won any Thai boxing titles on a best Muay Thai fighter list. But if you know Somrak Kamsing and the legendary status he has in Thailand you won’t argue.

Somrak Kamsing is the first ever Thai boxing to win an Olympic gold medal in the ‘92 Olympic Games. He is highly revered in Thailand and was immediately a fan favorite when he began Thai boxing.

In Thai boxing, he was just as good as he was in amateur boxing and was known as “Mo Amata.”(Forever Boastful)

Unfortunately Kamsing was never given a title fight in Muay Thai and there are a couple possible reasons. Either because of politics or possibly that Kamsing was a huge betting favorite and made it impossible to make a fight.(Betting is a large part of Thai boxing matches in Thailand.)

Even without a title, Kamsing is still revered in Thailand and considered one of the best Muay Thai fighters ever.

Many Thai boxing historians and even fighters consider Samart Payakaroon the best Muay Thai fighter of all time. He has been called the Sugar Ray Robinson of Muay Thai.

His original trainer Kru Sityodtong said Payakaroon was the most talented fighter he ever saw. Samart was a master of the teep and people numerous opponents just with that front kick.

Even if his opponent’s got past his teeps, Samart would use his world class boxing ability to stop them.

Payakaroon would win 4 Lumpinee Stadium titles before winning the WBC Featherweight boxing title. The Jade faced executioner is considered the best ever by many and is now a full time trainer.