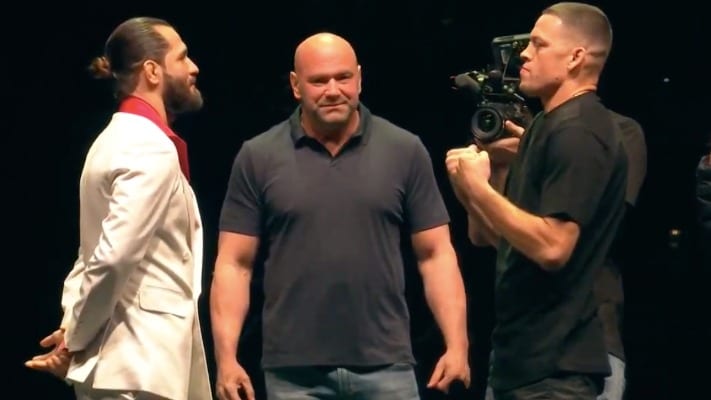 Many in the mixed martial arts world are excited for Nate Diaz and Jorge Masvidal to clash. However, Benson Henderson isn’t one of them.

Diaz and Masvidal collide for the BMF belt in the UFC 244 headliner which takes place November 2 in Madison Square Garden, New York. Despite no official title being on the line, the welterweight bout will headline the UFC’s fourth visit to MSG.

But for Bellator‘s Henderson — who holds victories over both competitors — the fight is just being promoted well as he believes it doesn’t really mean anything:

“They can put the millions of dollars behind promotion, that’s their job, what they are supposed to do,” Henderson told MMA Fighting (via MMA Mania). “They are a promotion company so their job is to promote things and say, ‘This is a huge fight!’ When you look at it, in reality it doesn’t really mean anything. There is no title on the line.

“There’s a made up title on the line, someone just told me like five minutes ago there is that belt on the line. That’s hilarious. It’s awesome, good for those guys it’s great, but it’s hilarious.”

Henderson was released by the UFC and joined Bellator in 2016. However, he has nothing against the Las Vegas-based promotion. He’s even happy for Diaz and Masvidal:

“It is, great for those guys. But UFC’s job is to spin it, create the thing for more people to watch. They do a great job of that. But for Nate and Jorge, good for them, I am happy for them. I like both those dues, their camps, it’s awesome and I am happy for them.”

Henderson takes on former UFC featherweight Myles Jury in the main event of Bellator 227 this Friday.

Do you agree with Henderson?