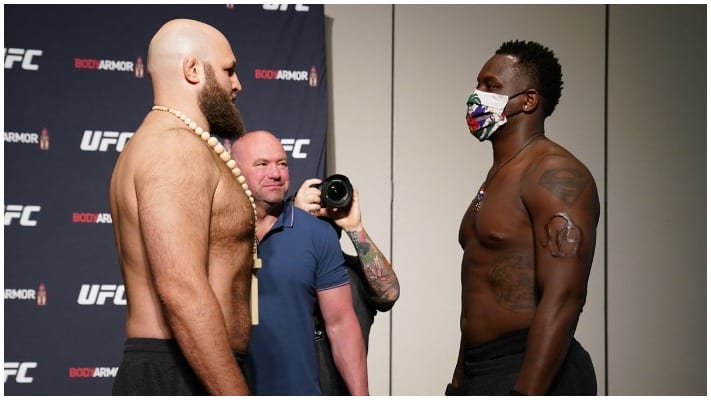 In tonight’s co-main event long-time UFC heavyweight Ben Rothwell will be hoping to make it two straight wins after picking up the victory over Stefan Struve late last year. He’ll face Ovince St Preux, who is making his heavyweight debut tonight. The former light-heavyweight contender comes into the fight 35lbs heavier than his last bout. Will he emerge victorious? Let’s find out!

Round 1: Both fighters come out quite tentatively. Ovince St. Preux is flicking out up kicks to try and keep Ben Rothwell at distance. Rothwell is backing up his opponent and is beginning to let his hands go. A couple of big rights have landed already during a few different skirmishes. St. Preux is showing Rothwell a lot of respect right now staying light on his feet and getting out of the way at all costs. OSP throws a high kicked and Rothwell catches it. The former light-heavyweight contender is down on the mat and Rothwell is trying to sink in a choke. Eventually he lets up and just starts letting shots go while leaning over OSP. St. Preux gets back to his feet towards the end of round one. Both men posture for a few seconds before the round finishes.

Round 2: OSP begins round two a little more aggressively. He’s throwing big kicks and punches with power. Rothwell lands a big right hand and a picture-perfect uppercut too. He’s hot OSP trapped up on the fence but is struggling to get anything off and the French fighter eventually escapes. St.Preux is back on his bike but it’s not long before he’s trapped against the fence against eating punches – Rothwell even lands a nice knee. Again they separate but not for long. OSP lands a nice shot but it doesn’t bother Rothwell who takes the fight back to the fence and mauls his opponent. When they separate St. Preux is covered in blood and looking visibly tired. Rothwell jumps in to try and land but eats a counter which drops him. OSP is on top as the round ends.

Round 3: OSP opens up with a big hook but he quickly finds himself back on the fence. Rothwell has the clinch and is trying to throw knees. St Preux punches his way out of it but again it’s not for long. Rothwell has hi up against the fence again and is throwing big shots which are landing clean – these are the best moments of the fight for ‘Big Ben’. He realizes the finish isn’t coming and both fighters seem happy to take a rest against the fence right now. OSP makes some pace and lands a big hook followed by a head kick. Rothwell still isn’t fazed. He presses his opponent back to the cage again. He’s hitting uppercuts, knees, and trying to stay heavy on the fence. The last 20 seconds sees the fighters back in the middle of the cage. They are swinging wild but OSP is getting the better of it. The bell sounds to end the fight but OSP lands one final punch which drops Rothwell. He gets straight back to his feet to await the judge’s verdict.