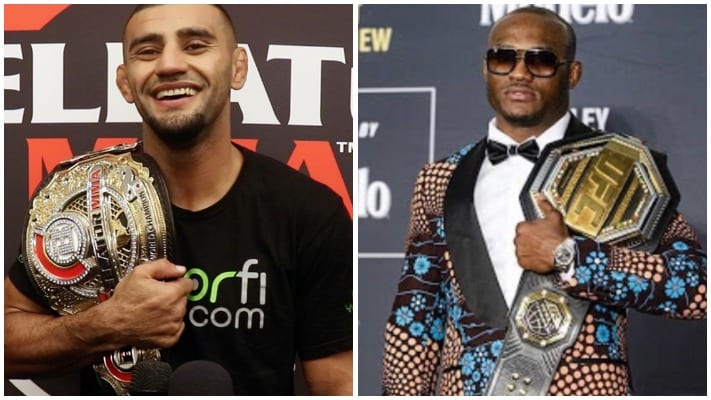 Bellator welterweight champion Douglas Lima doubled down on his claims that he would beat UFC welterweight king Kamaru Usman.

Lima regained the welterweight title following a dominant unanimous decision win over Rory MacDonald at Bellator 232 last month. In the process, he became a three-time Bellator champion with 11 wins in his last 13 outings.

Debates naturally came up afterward about who the best welterweight in the world was. Lima obviously believes he’s one of the best, but the fact that he’s being considered by many despite not being in the UFC is something that excites him:

“I consider myself one of the best,” Lima told MMA Fighting. “I’ll fight anyone in the division no matter where they are. I believe I’d beat any one of those guys (in the UFC). Rankings are complicated, anyone has their opinion, but seeing that many consider me the best excites me even more.”

If he got his way, “The Phenom” would face the best the UFC has to offer. So naturally, he would love to face Usman, who is yet to taste defeat with the promotion:

“The champion, no doubt,” Lima added of who he’d want to face. “I would choose the one who’s considered the best. Usman is really tough, has good wrestling, so I wouldn’t think twice before choosing him. It would be a big fight.

“He’s on a roll, (and) he’s breaking everyone, so it would be a good fight for me, even if his style doesn’t favor me. I had problems with wrestlers in the past, and he has good wrestling. But I’m evolving, (and) I’m feeling great. I don’t think too much about it, but it would be great if that happened.”

Lima previously claimed he was better than “The Nigerian Nightmare” and believes if that fight did come to fruition, it would only end in one way:

“A knockout, right? For sure,” Lima said. “I’d go for the knockout. He has knockout power, but he usually wins by decision. I believe we would eventually find that chin.”

Do you agree with Lima?