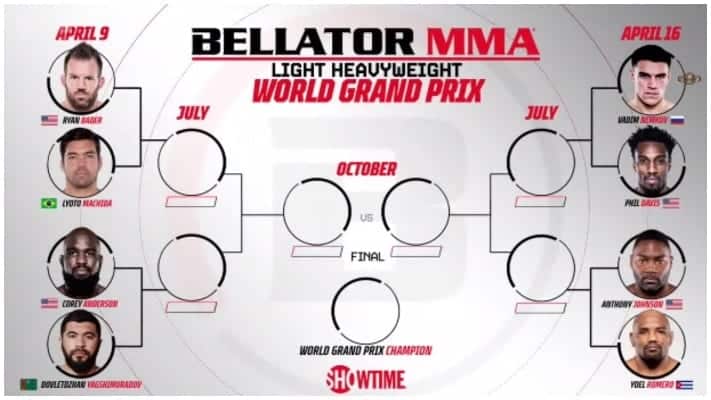 Bellator has announced a light-heavyweight Gran-Prix is set to take place.

An anonymous source with knowledge of the announcement reported the news to MMA DNA earlier today.

Bellator have since confirmed the story during a press conference.

To no one’s surprise, newly signed knockout artists and former UFC title challengers Yoel Romero and Anthony ‘Rumble’ Johnson will be joining the action at 205 in their Bellator debuts. Although to a certain shock, Scott Coker has matched up these powerhouses to fight each other on April 16th!

Ryan Bader, the former kingpin of the division will also look to stake his claim back on the title. Bader was defeated by Fedor Emeilianko’s protege, Vadim Nemkov in a series of attacks in round two. While Bader may not get his revenge on Nemkov immediately, he will have a chance to redeem himself against another familiar opponent in Lyoto Machida. “The Dragon” knocked out Bader in their first outing in 2012. The two will meet once again on April 9th.

Nemkov now wears the crown at 205. He will take on former foe Phil Davis in a rematch. The two fought to a split decision back in 2018 with Nemkov getting the nod from the judges. This time the title will be on the line, come April 16th.

Another name that will be thrown into the mix is Corey Anderson. “Overtime” made quick work of Melvin Manhoef in his debut under the Bellator banner last November. He has since called out for a title shot against Nemkov. However, the new signings of “Rumble” and Romero have left the title picture complicated. Anderson will fight highly-touted debutant Dovletdzhan Yagshimuradov.