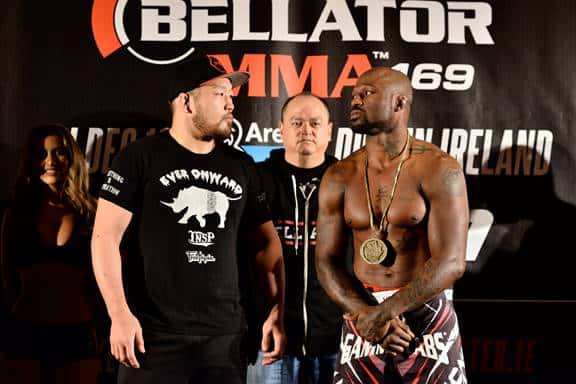 Bellator officials held the weigh-ins for Bellator 169 on Thursday.

Bellator 169 takes place on Friday December 16, 2016 at the 3Arena in Dublin, Ireland. The main card will air live on Spike TV. Muhammed “King Mo” Lawal vs. Satoshi Ishii in a heavyweight bout will serve as the main event while James Gallagher vs. Anthony Taylor will be the co-main event. Rounding out the five bout main card is Daniel Weichel vs. Brian Moore in a featherweight bout, Kavanagh vs. Elina Kallionidou in a featherweight bout and Shay Walsh vs. Luiz Tosta in a bantamweight bout.

In addition to a full card of Bellator action, ticketholders will also have the opportunity to experience an additional fight card from Europe’s leading mixed martial arts promotion, BAMMA. The bantamweight belt will be on the line at BAMMA 27, as Tom Duquesnoy (13-1, 1 NC) and Alan Philpott (16-8) prepare to fight out for the division title.