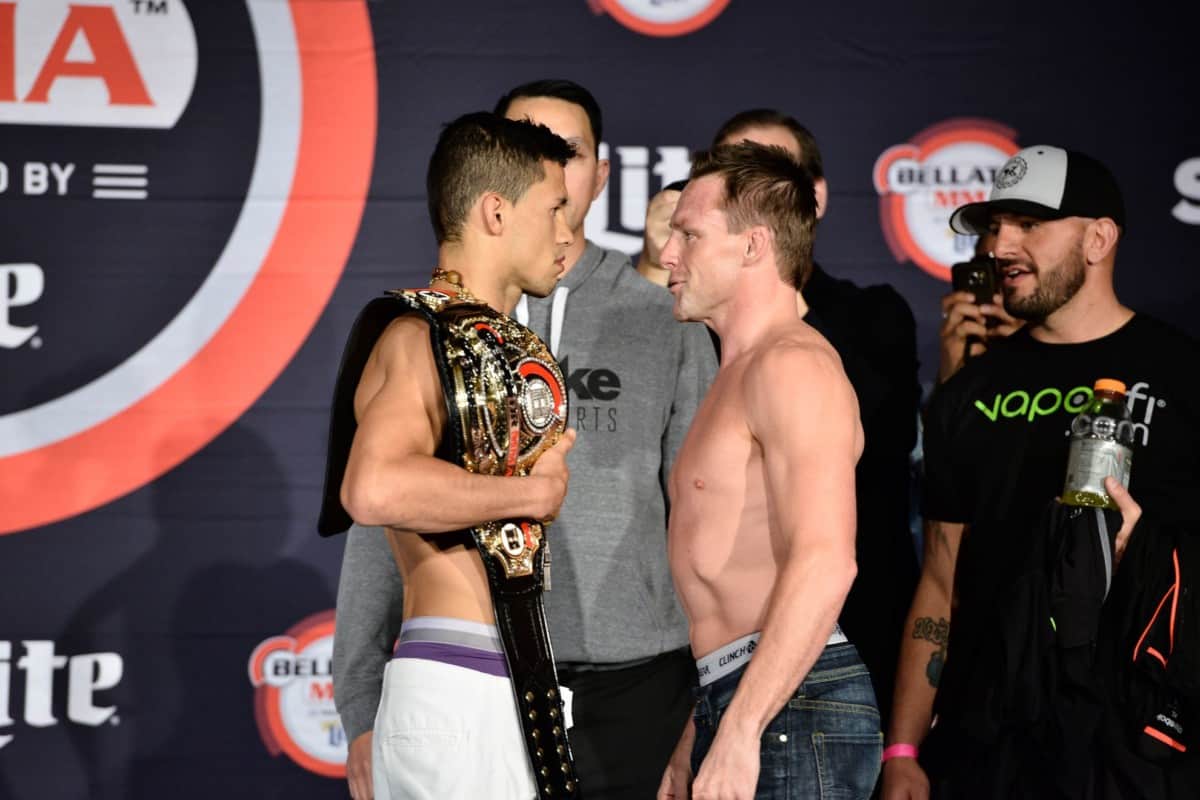 It’s once again fight day here at LowKickMMA, and the talent on display tonight (Friday, December 2nd, 2016) will come in the form of Bellator 166. Headlining the card are Eduardo Dantas and Joe Warren, but there’s a whole bunch of great fights also taking place on the rest of the main card.

Eduardo Dantas (19-4) and Joe Warren (14-6) met in a bantamweight title bout in the main event. In round 1, Warren came out confident and was pressing forward. Dantas was using a lot of kicks and using his range nicely. Warren did not close enough to shoot yet, offense limited to lunging overhands shots. Warren was forced to shoot from too far out a couple times, Dantas easily shakes him off and resumes his attack to end the round. In round 2, Warren looked better in this round but Dantas was out striking and working him. Dantas was still avoiding all grappling exchanges Warren briefly caught a knee but Dantas got out of the single leg easily. Dantas started to taunt him in this round and was just crushing him with leg kicks. In round 3, Warren catches a kick and ties up Dantas, moving around to a rear waist lock. He knees Dantas but can’t get the takedown and they separated. After eating some big shots, Warren shot in on a takedown but was stuffed then kicked in the nuts. Warren was bleeding from his forehead at this point.  In round 4, Warren’s offense limited to jump knees and lunging right hands. He ties up Dantas along the cage late in the round and hits knees and a brief trip. Dantas continued to dominate the striking. Warren was pretty busted up at this point. In round 5, Warren was kicked in the nuts eary and a point was taken away from Dantas. Warren clinched with him up against the fence and worked for a takedown. He couldn’t and they exchanged to the bell. Dantas earned the majority decision win to retain the title.

A.J. McKee (6-0) and Ray Wood (7-3) met in a featherweight bout in the co-main event. In round 1, Wood opens up with a front kick. McKee slammed him down in the first minute of the round. Wood got to his feet and McKee landed some knee strikes. Wood started throwing some wild strikes. McKee clinched and took him down halfway through the round. Near the end of the round, Wood got back to his feet, landed some strikes and then dropped him with a flying knee. McKee took him down again. In round 2, Wood went for a takedown but McKee stuffed it. McKee took him down and pressed him up against the fence. McKee worked him over with strikes. McKee got his back with less than two minutes to go and landed some strikes. In round 3, McKee took him down early and worked him over with strikes. Wood was tough but McKee overpowered him on the ground. McKee pikced up the decision victory.

Marcos Galvao (17-7-1) and L.C. Davis (23-7) met in a bantamweight bout. In round 1, Davis landing long left hands as Galvao tries to walk him down. Davis clinches with him early in the round. They exchanged knees while in the clinch. Galvao scored a takedown with two minutes to go and got guard while landing strikes. Davis scrambled to his feet but Galvao dragged him back down. With less than 20 seconds to go, Davis got to his feet, clinched and landed knee strikes. In round 2, Davis was kicked in the nuts early in the round. Galvao scored a takedown within the first minute of the round and worked him over with shots from guard was Davis was trying to kick his way out and did so moments later. Davis clinched with him up against the fence. They exchanged to the bell. In round 3, Galvao’s takedown attempts were making Davis hesitant. Galvao was circling a lot in this round. Davis clinched with him up against the fence and worked him with knees. Galvao was visibly tired at this point. The judges gave the win to Galvo.