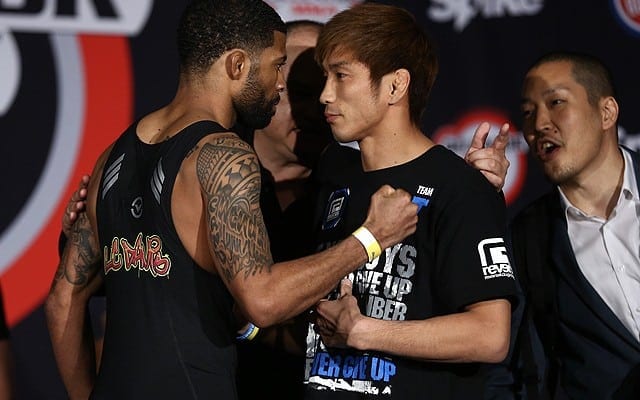 Despite a controversial main event finish that saw Marcos Galvao take the bantamweight title from Joe Warren via verbal submission, the co-main event of last night’s (Fri., March 27, 2015) Bellator 135 from Thackerville, Oklahoma was the real main attraction of the show.

Contested as a potential title eliminator to determine who would eventually be Galvao’s next foe, LC Davis and Hideo Tokoro brought an incredible 89 combined mixed martial arts (MMA) bouts into the fight. The experienced bantamweights threw down in an instant classic that saw both fighters throw and land a varied assault of flashy strikes, turning the tables on their opponent at every turn.

In the end, Davis picked up a razor-thin split decision, his third straight under the Bellator banner. It wasn’t without its price, as the tough-as-nails Davis called out for his title shot afterwards despite having several teeth knocked out.

Watch the full fight video of the bout that has the MMA world buzzing below: