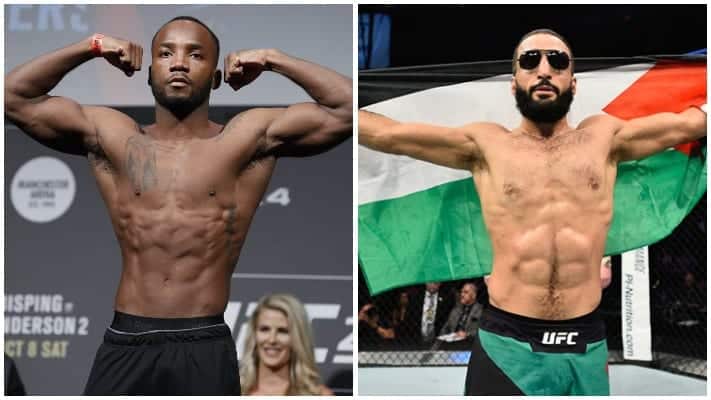 UFC welterweight Belal Muhammad has reacted to missing out on a rematch with Leon Edwards who is now set to fight Nate Diaz at UFC 262.

‘Rocky’ was originally set to fight Khamzat Chimaev in the UFC Vegas 21 main event. The undefeated Swedish fighter was ruled out of the bout due to COVID-19 complications. Muhammad stepped in to save the show.

In his return, Edwards appeared to be performing well hurting and dominating Muhammad in the first round. During the second stanza Muhammad was on the receiving end of a painful, inadvertent eye poke which brought an unfortunate end to the fight.

Post-fight, Edwards revealed despite the inconclusive result he did not want to rematch Muhammad. The Englishman believes he should be moving on to bigger things.

“I belong in a title shot, I have worked my way back up from getting defeated by Kamaru Usman,” Edwards said. “I have fought everybody, I have offered to fight everybody so I feel I deserve A title shot now, why should I do another ten fights to get a title shot you know?”

Muhammad was angered by Edwards refusing to rematch him.

“Never saw someone act so tough after poking someone in the eye the fight was just getting goin and if your satisfied to end it on that note your soft you ain’t getting a title fight off that I took the fight on 3 week notice and came to fight run it back @ufc,” Muhammad wrote on social media.

It seems like the promotion has sided with Edwards on this one.

The welterweight title is currently tied up as Kamaru Usman is set to defend against Jorge Masvidal at UFC 261.

‘Rocky’ will get the next best thing. A lucrative and high-profile fight with one of the most popular fighters in MMA, Nate Diaz.

Who do you think Belal Muhammad should fight next?