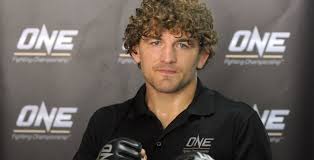 OneFC welterweight champion Ben Askren rarely if ever hides his feelings about the UFC. He’s been involved in a long back-and-forth with UFC President Dana White about how the world’s biggest MMA promotion pays and treats his employees.

That’s why it was kind of a shock to see Askren cut off by show host Kenny Rice on Friday’s Inside MMA on AXS TV when he simply voiced his already-known views about the UFC. Many were quick to jump all over AXS TV, and that prompted CEO Andrew Simon to issue a public apology on Twitter last night:

@Benaskren I apologize for @InsideMMAaxstv closing mic.We respect your opinions & look forward to having you back to continue the discussion

Simon appears classy in his quick apology, as most believed it was kind of counterproductive to have Askren on the how if you were going to malign his well-documented beliefs.

Askren jumped onto his own Twitter account to call out Rice as a “UFC shill,” strong words from an obviously angered fighter. It’s that kind of attitude that Askren clearly fights against, and he was merely arguing that he could carve out a great and lucrative career outside of the UFC if he so chooses.

The heart of Askren’s argument is that he simply wants to be treated well by whichever promotion he decides to fight for. “Funky” knows that he may have to forego fighting the best in the world in order to do this, something’s he’s apparently willing to do.

The former Bellator champion has been in the news for his recent four-fight win streak that includes four finishes. While White has gone on record saying that he would never sign him, his successes lead him to reconsider.

Askren isn’t exactly ready to “kiss up” to the UFC, but he said he is willing to talk man-to-man. Whether or not he gets his MMA economics debate with Rice remains to be seen, however.