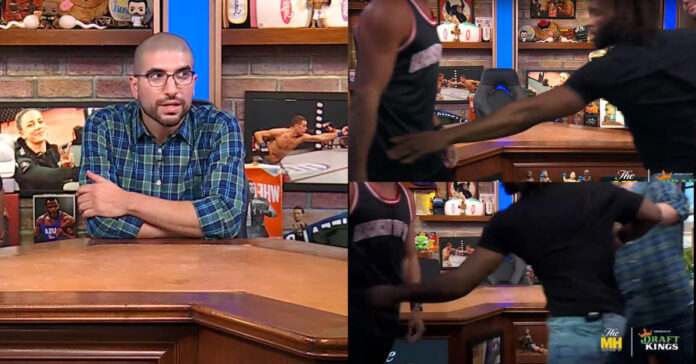 Raufeon Stots and Danny Sabatello got into a brief physical altercation live on air, needing the host Ariel Helwani to step in and separate the two.

The current interim Bellator bantamweight champion Stots is slated to take on Danny Sabatello at Bellator 289 on Dec. 9 at Mohegan Sun Arena, Uncasville, Connecticut. Coming off an impressive knockout win over Juan Archuleta in April, Stots will go into the bout on a 10-fight win streak, having maintained an unblemished record in six outings under the banner.

On the other hand, Sabatello will put his seven-fight win streak on the line. After joining Bellator in May 2021, “The Italian Gangster” made a successful debut and went on to win his next two bouts, the latest of which gave him his first five-round experience in the promotion.

In an in-studio appearance on The MMA Hour with Ariel Helwani, Stots & Sabatello sat across each other to talk about their upcoming fight at Bellator 289. While the contest is still about four months away, the heat between the two started flaring up as soon as Stots claimed to be the better wrestler.

“I’m a better wrestler,” Stots said. “We could wrestle right now and I’d beat the sh*t out of him.”

Helwani was quick to step in and make sure the altercation was only brief. He placed himself in between Stots & Sabatello to separate them, avoiding a major mishap or possible injuries. Sabatello took Stots’ belt next and continued provoking him. Helwani took the title from Sabatello and kept it back next to Stots, who apologized for the whole incident.

Fortunately, they were able to continue without any bitterness towards each other as they got back to trading verbal jabs as opposed to physical ones.

What are your thoughts on how Ariel Helwani handled the situation?