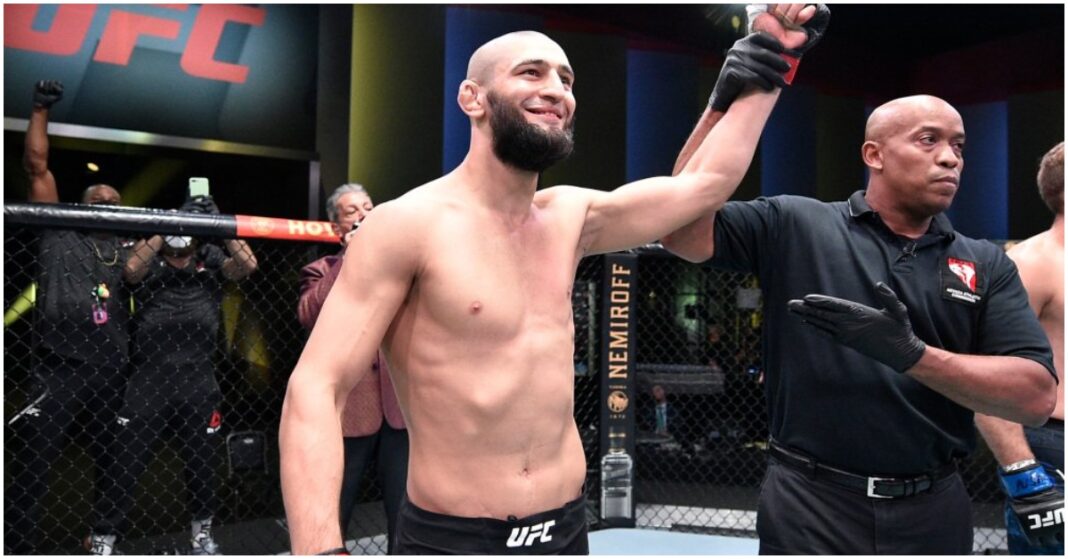 ‘The Wolf’ burst onto the scene in 2020 on ‘Fight Island’ and has quickly become one of the most exciting prospects in MMA.

Chimaev has picked up four wins inside the Octagon and is averaging less than one absorbed strike per fight.

‘The Wolf’ seems destined for big things in 2022 and is already being linked to a fight with Gilbert Burns.

During a recent appearance on Michael Bisping’s Believe You Me podcast, Smith revealed that he heard about Chimaev ragdolling UFC heavyweight Ilir Latifi and light-heavyweight title contender Alexander Gustafsson in the gym.

“Other people said it first, so now I can say it out loud. I’ve heard the stories of Chimaev for years, like a couple years before he was even in the UFC,” Smith said. “I remember hearing his name, some young kid that’s ragdolling Ilir Latifi and Gustafsson down in Sweden. Even when he finally made it to the UFC, beat a couple of guys and looked really good, I kept that to myself until other people had told the story like, ‘Hey man, I’ve been hearing the stories about this kid beating the s**t out of those guys for a long time.” (Transcribed by Sportskeeda)

Despite being routinely beaten up by him in the gym Gustafsson holds no ill will towards his teammate.

“I think he’d [Khamzat Chimaev] put Kamaru Usman to sleep honestly,” Gustafsson told ESPN. “I think if he just touches his chin, it’s a big chance that Kamaru, Kamaru Usman goes to sleep. I like Kamaru Usman, he’s a great champ and he’s just been breaking records and like you know, it’s a pleasure to see him fight because he’s a very good technical, you know I love his jab and his wrestling and you can see that he’s on top, Kamaru Usman. But I just can’t see him take Khamzat’s punches.”

Do you think Khamzat Chimaev will become UFC champ in 2022?