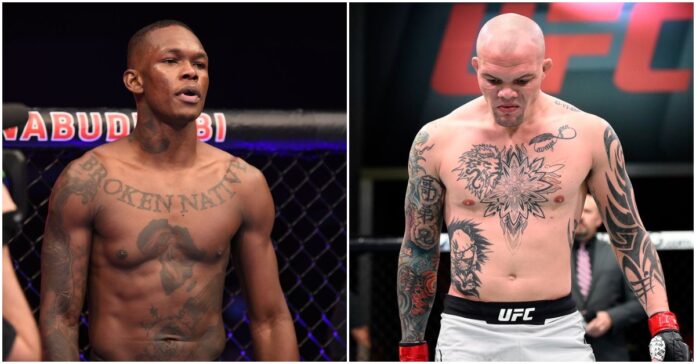 Former UFC light-heavyweight champion, Anthony Smith shares who he feels would have the best chance to defeat Israel Adesyana at middleweight.

Following UFC 271 and his second victory over Robert Whittaker, middleweight champion, Adeesyana has now beaten four of the top five, two of which he has beaten twice and there seems to be no slowing down.

Before his rematch with Whittaker, the consensus was that since their first fight, ‘The Reaper’ had made improvements and that the level between those two and the rest of the division was significant. Although the bout was closer and some felt Whittaker was hard done by, Adesyana retained, making it four-for-four on title defences.

Adesyana looks to be facing Jared Cannoioner, potentially in due but the opening betting odds had ‘Style Bender’ as high as a -300 favorite.

Smith, who is an analyst and fighter, feels there is one man who poses the most threat to Adesayna, Alex Pereira.

“I think the guy that’s probably got the best chance, and this is gonna be a crazy statement, he’s in the UFC but he’s not ranked.” Smith said on the latest episode of DC&RC, “I think it’s Alex Pereira. This kid is good. The problem with Alex is he’s gonna have a tough time getting to Israel. There’s a lot of high level wrestlers, some good jiu-jitsu guys, I think his hardest path is to get to him. I’m not putting a whole lot of weight into him already knocking Israel out in another organisation and in another sport.

“He’s a guy who can fight Israel at his exact same game. He plays the same game, fights very similar, he’s very comfortable. He’ll keep the fight slow but explode when he has to. He’s got the power and the kicking ability, which is really big when it comes to Israel Adesanya. That’s why Jan Blachowicz was so successful.” (Transcribed by BJPenn.com)

Pereira famously knocked out Adesayna in kickboxing before moving over to MMA where he is 4-1 overall and 1-0 in the UFC, he will make his UFC return against Bruno Silva on March 12.

Do you agree with Anthony Smith? Does Alex Pereira pose the biggest threat to Israel Adesyana?