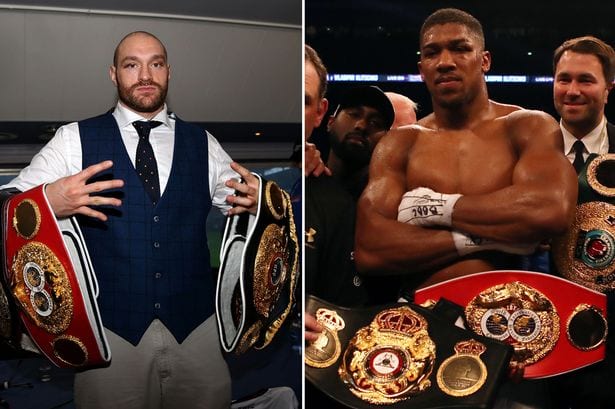 In the topsy-turvy world of boxing, anything can happen and often does. Because of that, Anthony Joshua could still fight Tyson Fury next.

Joshua, 29, is the unified IBF, WBA and WBO heavyweight champion. He already has the date and venue for his next fight – April 13, 2019, at Wembley Stadium.  As far as who Joshua will be fighting? Well, that to be a more difficult to as Joshua has options.

Fighting his greatest British rival Tyson Fury would no doubt be a spectacle. However, a unification bout with WBC heavyweight champion Deontay Wilder is the primary target for Joshua. Promoter Eddie Hearn detailed ongoing discussions:

Hearn then clarified that Joshua could indeed fight Fury next:

They said AJ’s ducking the fight and now they’ve said AJ’s begging for the fight, but you can’t be doing both. But anything could happen. We could fight Fury. It would [be massive]. But worldwide the bigger fight is Wilder and he [Joshua] wants the belts, he wants to be undisputed and you’re not going to get many opportunities to be undisputed so that’s really what he’s focusing on,” Hearn said.

Wilder has a two-fight deal on the table with Joshua. But it looks as though the American is leaning toward a rematch with Fury after their epic throwdown earlier this month.

“Who would you want to fight? Not being funny. I know Fury’s tricky but you’re not going to get hurt. And he’ll fancy he can knock him out this time. So if I was Wilder I would probably fight Fury and think it’s a less taxing fight,” Hearn said. “Someone is getting absolutely rendered unconscious in Wilder against Joshua. That isn’t going 12 rounds.

“Our deal is a two fight deal. So if he fought Joshua he’d know that he had two fights in the bank to become undisputed. He gets effectively two bites at the cherry. If he loses to Fury, he’ll probably have a rematch clause but when are you ever going to fight for the undisputed championship?”