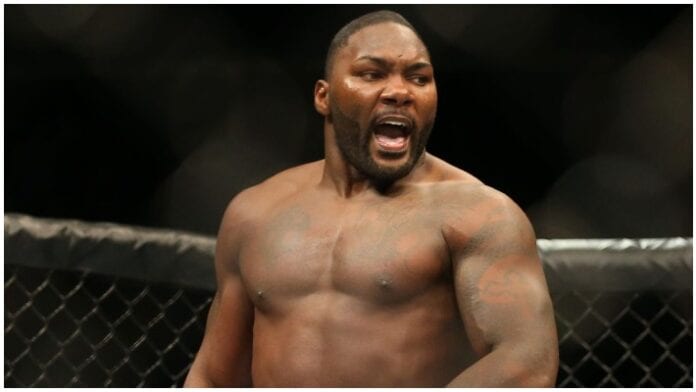 Former UFC light-heavyweight title challenger Anthony Johnson dropped out of his bout at Bellator 268 due to an illness according to mmajunkie.

‘Rumble’ (23-6 MMA, 1-0 Bellator) was slated to fight against Vadim Nemkov who is the current light-heavyweight champion.

The event takes place on Oct. 16, 2021, in Phoenix, Arizona. Nemkov is 14-2 in his career but has an undefeated record (6-0) with Bellator. Johnson has not only lost his chance to win the tournament but also has lost his shot at the title (Nemkov will defend his title against every opponent he fights in the tournament). There is yet to be a substitution made at this moment for Johnson’s spot, as Nemkov will continue to fight at the event.

Johnson had his Bellator debut back in May of this year. He won via KO of Jose Agusto in the quarterfinal of the ‘Light Heavyweight Grand Prix’. Johnson was dropped in that fight against the Brazilian but came back in the 2nd round to KO him. After the fight, he called his performance a “piss-poor performance”. ‘Rumble’ was supposed to greet UFC alum Yoel Romero in that fight. An eye issue caused Romero to drop out of that fight in May.

‘Rumble’ was excited to fight Nemkov and in his post-fight interview after the Agusto fight said, “Fighting Nemkov, though – that’s an honor to fight him,” Johnson said. “He’s a beast. He’s the most complete fighter of this tournament. He can strike, can wrestle, can submit people fairly easy. I’m a big fan of his.”

Bellator 266 (tonight Sept. 18, 2021) headlining Romero (who was slated to fight Johnson in the tournament) against Phil Davis. A win by Romero could see him filling the spot that Johnson held in the tournament.

Who do you think will replace Anthony Johnson & fight for the title at Bellator 268?