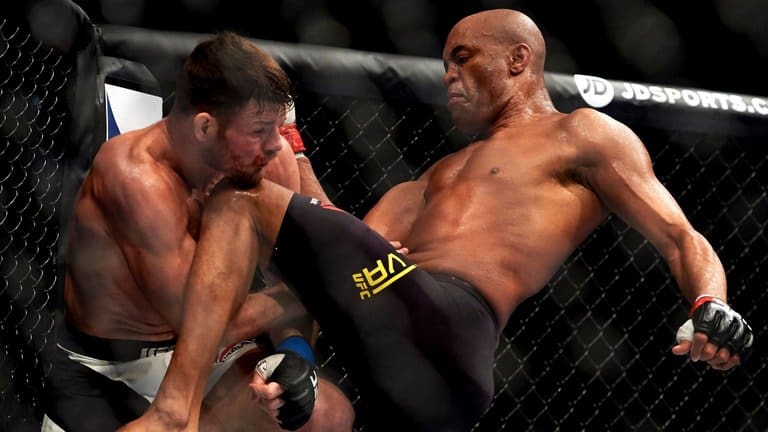 Reigning UFC middleweight champion Michael Bisping and former longtime divisional kingpin Anderson Silva have gone back and forth in the media ever since the final bell rang in their controversial Feb. 2016 bout, a fight in which Bisping won via decision.

Although the two have indeed taken shots at each other, Silva feels as if the feud is ‘healthy’:

“Actually, he is controversial,” Silva told “Combate News” on Combate (and translated by MMAjunkie). “Every now and then, he posts something, taunts. I actually shouldn’t keep up with the pace of his taunting, but it’s funny because people follow us on Twitter, and it’s cool, because they end up interacting.

“It’s nice, in a level, because it’s healthy. We are not attacking each other. Although he sometimes crosses the line, it’s healthy. And I think it’s important for the fans to have that interaction of taunting each other a little bit, within our limits and what we feel is right.”

“The Spider” has fallen on rough times as of late, as he’s lost four of his last five bouts with the fifth being changed to a no-contest after he failed a drug test surrounding a Jan. 2015 bout with Nick Diaz. Despite his fall from greatness, the Brazilian legend feels as if he beat Bisping, and he explained why below:

“In my opinion, I won,” Silva said. “It was very controversial because he landed two strikes when I was out of balance. He ended up getting the points. There was a situation when he was on top for a while, but I think I won the fight. Because when he ate the knee, the bell rang. And the rule, if I’m not mistaken, says he needs to get up on his own to go to his corner. He didn’t get up on his own and, while I was up in the cage, the commission came in.

“The commission never enters if the fight isn’t over. So when the commission came in, I was already celebrating, because he was knocked out. It’s a sport, I didn’t have to keep attacking him, also because the bell rang. But it’s done, it’s over. After he was knocked down, they brought in the stool for him to sit. The commission helped him get up and sit on the stool. He didn’t get up on his own. He was sitting in my corner, then they removed the stool, and put it in his corner, and he was sitting down for a while.”

Due to the fact that he feels as if he got the better of “The Count”, Silva would like a rematch ‘regardless’ of if Bisping is the champion or not:

“In my opinion, I (beat Bisping),” he said. “But it’s OK. He’s the champion, he needs to be respected, and I hope to have another opportunity to fight him regardless of it being for the belt.”

At age 41, Silva is clearly past his prime when he reigned over the 185-pound division for nearly seven years, but he did say that he has ‘five or six’ fights left on his contract, which he unsurprisingly plans to complete:

“But it’s not something that I’m seeking. I want to do the fights that I need to for my contract. (I want to) put on good fights, of course, and I hope to win all of them and give a good show to the fans.”

Could “The Spider” have one last run left in him, or has time simply passed him by?