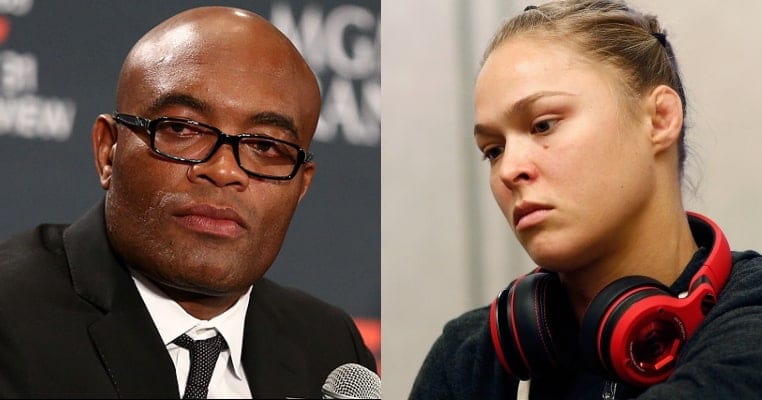 If any fighter can relate to Ronda Rousey at this point in her career, it may be former longtime UFC middleweight kingpin Anderson Silva.

Rousey, the once dominant 135-pound titleholder, has suffered back-to-back stoppage losses to Holly Holm and Amanda Nunes. After being brutally knocked out by Holm in Nov. 2015, Rousey spent most of 2016 on the self before returning at Dec. 30, 2016’s UFC 207 only to be finished by Nunes in 48 seconds.

Silva was also a dominant champion at one point, reigning over the 185-pound division for nearly seven years. In 2013, however, he was brutally knocked out by Chris Weidman. Since then, Silva’s record stands at 0-3-1.

Being that he has been in Rousey’s shoes before, “The Spider” recently offered up some advice to the “Rowdy” one, and he said that he hopes 2017 is a year of ‘many wins’ for the ex-champion:

“After her first loss, I sent her a message,” Silva said (Via MMAJunkie). “Right then, I posted something on social media motivating her. I think regardless of what happened and what will happen in your life, you need to keep your head up because what you did will stay in history. Regardless of wins or losses, you need to care about what you see as the most important in your life.

“I hope 2017 is a year of many wins for you and new accomplishments, and that if you keep fighting, that you return well. The way I see it, personally and technically as a fighter, pick your opponents better when you return. Don’t fight someone who’s as active as the champ. I think it was the wrong strategy. I hope you come back. You’re a great athlete. God bless you.”

While it’s unclear whether or not Rousey will ever fight again, perhaps she should take Silva’s advice and ease her way back into competition. Either way, “The Spider” says that losing is part of the game, and that fans and critics need to understand that:

“But as for Ronda, it happens. These are things that happen. It’s not like, ‘Oh, she should have lost because she’s arrogant.’ No. It happens. You get up there, and you can either win or lose. It’s natural. People need to understand that.”

Do you agree with Silva’s assessment of the situation?