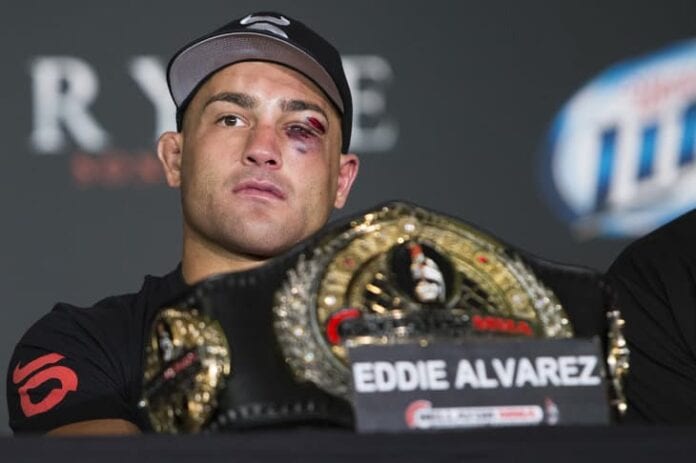 It was announced a few weeks back that two former lightweight champions will square off at UFC Fight Night 81 on January 17, 2015 as No. 1-ranked former UFC champ Anthony “Showtime” Pettis meets No. 4-ranked former Bellator champion Eddie Alvarez. This fight is absolutely crucial to both men, as both are looking to remain in the hunt for a title.

Alvarez held the Bellator title for quite some time until he finally made the jump over to the UFC last September, but his debut didn’t go as planned, as he dropped a loss to current title challenger Donald Cerrone. However, “The Silent Assassin” recently picked up his first Octagon win over Gilbert Melendez last June.

Pettis on the other hand has been out of action since last March when he was absolutely battered by current champion Rafael dos Anjos, losing his title in the process. Speaking on today’s (September 21, 2015) edition of the MMA Hour, Alvarez said that he will be expecting a highly motivated “Showtime” come January:

“As an ex-champion myself, it’s always the most highly-motivated, well-trained person you are going to go against. Coming off a loss for your title, you are the most motivated, you’re waking up early, going to bed late. It’s just one of those things where you want to get back and prove to fans and prove to the world that you’re a champion.”

Despite expecting a hungry Pettis, Alvarez is highly confident, saying that Pettis will not be good enough to beat him. The former Bellator kingpin also said that he doesn’t understand the fans who are picking “Showtime”:

“And, I’m expecting that guy, but that guy won’t be good enough. Not in Boston, not against me. I just don’t feel however he comes back, the guy he comes back like will not be good enough against myself. It’s just not going to happen. I’m baffled by fans perception of this fight, but it makes me more excited to go out there and do what I am about to do. It’s just, I don’t realize how and where fans come up with these predictions. To me, this guy is super popular and they think the world of him, or I don’t know. Maybe I’m seeing something they’re not seeing. But we’ll see. The truth will come in January.”

Which former champion will continue his climb back to the top?