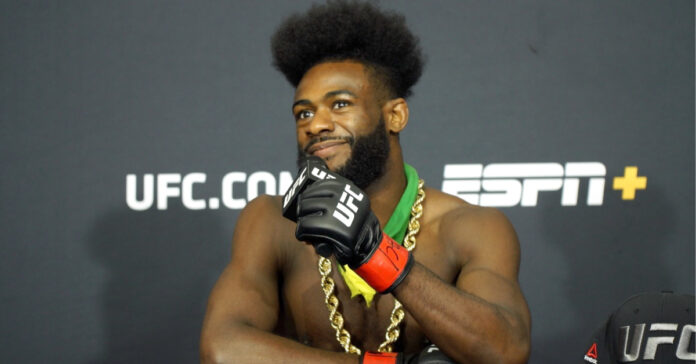 Aljamain Sterling will defend his bantamweight title against TJ Dillashaw at UFC 280. Never one to overlook his opponents, Sterling has devoted his attention to his upcoming matchup, however, the champion could foresee two potential opponents he may have to face in his near future if he is able to emerge victorious.

In a division overwhelmed with talent, it is probably not the worst idea to be aware of the rising contenders attempting to take your spot on the top of the throne just as Aljamain Sterling has done.

Although ‘Funk Master’ could see potential wildcard plays be thrown in his direction such as Deiveson Figueiredo if he were to jump up to the 135-pound division. As well as a matchup with former two-division champion Henry Cejudo if he were to make good on his promises and return to the sport.

As it stands Sterling believes Chito Vera and Sean O’Malley are in pole positions currently to earn themselves a shot at the bantamweight strap.

“There’s a couple of wildcards like Din Thomas just mentioned. You’ve got Deiveson Figueiredo potentially coming up to 135 [pounds]. You got Cejudo kinda waiting in the wings somewhere, around there, doing his thing.”

“But I think for me, it comes down to the best matchup, the best performances, and I think right now ‘Chito’s’ definitely the front-runner,” he continued. “After I get past T.J., because I don’t want to look past him, I get the job done. I think whoever has the best performance, it might be a ‘Sugar’ show, it might be a ‘Chito’ show. I’m not sure which one yet.” Aljamain Sterling said on UFC Live. (Transcribed by MiddleEasy)

It could well be that Sterling is spot on with his thought process about who his next potential title defence could be against. Chito Vera has earned emerged as a serious contender within the bantamweight division and was able to emphasize that with his expertly delivered knockout of Dominic Cruz last month.

O’Malley, on the other hand, does not quite have the same resume standards as Vera but if he were able to overcome former interim champion, Petr Yan, at UFC 280 he stakes a very good claim for himself to be next in line for a shot at the title.

Do you think Aljamain Sterling will successfully defend his title against TJ Dillashaw at UFC 280?