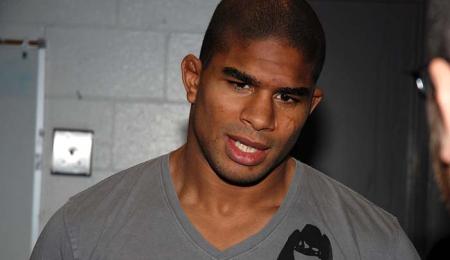 Alistair Overeem’s 2-2 record in the UFC isn’t really a reflection of the hype that the Dutch kickboxer brought with him to the promotion back in 2011. At that time, ‘The Reem’ was undefeated in four years, and was fresh off knocking out Peter Aerts to win the K-1 World GP. Up until 2007, Overeem had fought mainly overseas as a light-heavyweight.

Also quite derogatory to Overeem’s reputation was his failed drugs test for the UFC, and the resulting 14-month ansence from the sport had a big impact on his performances. Suffering back-to-back knockouts against Antonio ‘Bigfoot’ Silva and Travis Browne, Overeem had to fight for his job against Frank Mir at UFC 168. ‘Reem’ won the fight by decision, and the time since has been spent recovering from elbow surgery.

In a recent interview with Submission Radio, Overeem addressed the subject of a rumoured move to 205 pounds, as a result of his weight loss in recent times:

“I’m eyeing the title, and title fights are five round fights, and even if you’re not fighting for the title you’re fighting main events. So you’ve gotta be ready for that five-rounder, and cardio is one of the key components. I’ve just been focusing on my job, on what is important, and you know strength of course is important, but even when you lose a couple of pounds I’m still just as strong.”

Back in the days of Pride FC, Overeem was a lanky light-heavyweight and got overpowered by guys like Mauricio ‘Shogun’ Rua and Ricardo Arona. During his tenure in Strikeforce and Dream, ‘The Reem’ manhandled big guys like Todd Duffee and Brett Rogers, but now finds himself against the bigger man in Ben Rothwell at Fight Night 50, as he continues:

After separating from Golden Glory, Overeem went back to Mike’s Gym to train for Travis Browne. He looked a lot lighter and faster than when he fought Silva, and was unlucky not to get the early finish over ‘Hapa’. Now training with Browne at Jackson’s MMA, the Dutchman feels that the permanent move to New Mexico is one for the better:

“Well chemistry in that gym has been amazing, I’m learning every day, I get along with everybody, yeah it’s just really mellow, everybody’s just being themselves. There’s no egos in the gym, that’s what the coaches make sure of, leave your ego outside, and you know it works.”

“I’m there every day, I’m learning, developing, just focusing on what’s important; and that’s that thing, when egos are involved, that’s where the focus is at, and when there’s no egos you just focus on the training, and that’s what’s happening and I’m having a great time.”

We’ll see how much Overeem has developed when he fights ‘Big’ Ben in Connecticut this September, but should he call it quits if he is unable to get past Rothwell? ‘Big’ was himself involved in a recent drug test fiasco and has been out of action for a year now. It could be said that Rothwell isn’t really championship calibre, so ‘The Reem’ might want to go back to kickboxing if he is snubbed at Fight Night 50.