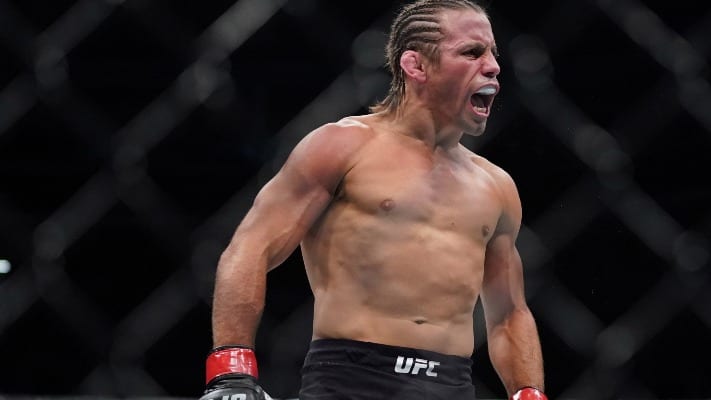 Urijah Faber has called for a title shot after he beat Ricky Simon at UFC Sacramento. It was his first fight back in two-and-a-half years, and he came back in a big way by knocking out the prospect in just 46-seconds.

Whether or not “The California Kid” deserves a title shot against Henry Cejudo is to be seen. But, the champ-champ’s manager, Ali Abdelaziz, doesn’t believe Faber deserves a championship opportunity, and instead should fight Marlon Moraes next:

“Urijah you know he got an impressive win last week. But, we never really got to see Urijah. He is 40-years-old and is coming back,” Abdelaziz said to TMZ Sports (as transcribed by BJPENN). “This is a young man’s game but you can’t deny him.

“The guy has been around for a long time. But, if he really wants to fight Henry Cejudo, I have a proposal for him. If you want Henry Cejudo, you can’t be the number 15 guy and fight Henry. There are a lot of guys in line. You got Aljamain Sterling in line, Petr Yan in line, but the guy above them is Marlon Moraes. He has a number ahead of him, number one. Marlon Moraes is number one.

“I manage Marlon Moraes. If Urijah Faber would like to get a shot at Henry, he should fight Marlon. If he beats Marlon he guarantees himself a title shot, if he beats Marlon he would become number one, as it makes no sense having number 14 fight the champ. You have to earn your way up. Listen, if Urijah beats Marlon, he deserves it,” the manager continued.

“Marlon is one of the best guys still in the division, he probably comes back and fights for a title soon. And I don’t know if this is really good for Urijah to fight Marlon but it is up to him. Marlon called him out, not disrespectful, everybody gives Urijah respect, he has paid his dues. But, as Henry said, he is always has been number two and now has a chance to fight number one and number one is Marlon.”

Whether or not Faber has any interest in that fight is unknown, as he seems adamant on wanting a title fight next.

Do you agree with Ali Abdelaziz’s proposal to Urijah Faber?