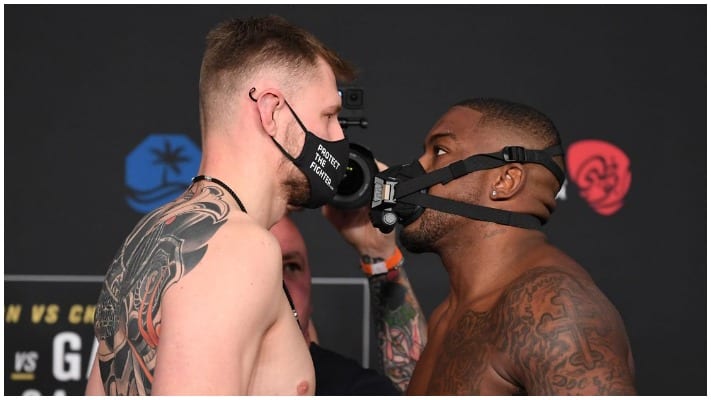 Up next at UFC 254 we have an exciting fight between two heavyweight contenders. Russian technician, Alexander Volkov is looking to propel himself back into the title picture when he takes on the heavy-handed, Walt Harris. Who’ll win? Let’s find out…

Round 1: Alexander Volkov is edging his way forward early. Walt Harris lashes out with a series of heavy shots to slow down that forward momentum. A brief break in the action and Harris fires off another power combo. Volkov is starting to find his range, he lands a beautiful right hand straight down the pipe. The Russian is starting to grow into this fight. He lands a nice kick to the body. Harris returns with a right hand. Both men are really going for this early – it’s super impressive. Volkov clearly wants to keep Harris on the back foot and it’s making for a fun fight. Volkov lands a huge shot! Harris is seriously hurt here. He’s covering up. Volkov is trying to find the finish but Harris swings back and survives the final seconds of round one.

Round 2: Harris feints a single leg and then fires upstairs but just misses. Not long after he does the same again. Volkov is giving him big reactions to these attempts after suffering a loss to elite-level wrestler Curtis Blaydes last time out. Volkov fires off a front kick to the body. Harris screams in pain and turns his back. Volkov follows up for the finish.