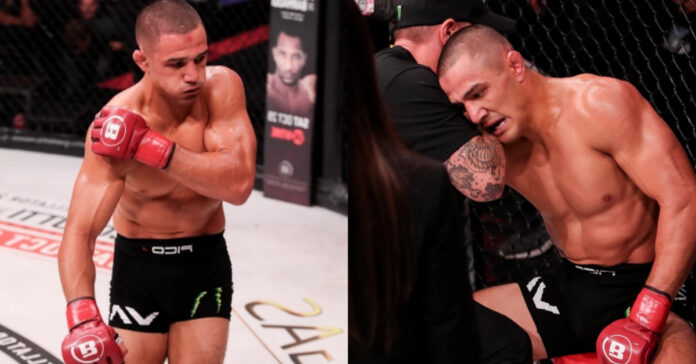 Aaron Pico has come to the defense of his coach for trying to put his dislocated shoulder back in place.

This past Saturday, Pico took on Jeremy Kennedy on the main card of Bellator 286 at The Long Beach Arena in Long Beach, California. He went into the bout looking to extend his six-fight win streak but was forced to settle with a TKO loss on his record when he dislocated his shoulder in the opening round.

Aaron Pico took to his Instagram account to share an update with his fans after the injury. He gave a breakdown of how the shoulder popped out of place and defended his coach for trying to put it back in.

“So I made it out of the first round, and my order to my coach was — keep in mind, guys, he’s not an expert, he’s not a chiropractor, he doesn’t know how put shoulders back into place. But my orders to him were, ‘Hey, my shoulder’s out, do whatever you possibly can to put it back into place.’ We tried everything and we couldn’t do it. And ultimately, the fight was stopped, which was probably the smartest thing.“

Pico is in good spirits but needs time to recover

Pico continued further that he is doing well and will be making a trip to the doctor this week and needs time to recover.

“I was rushed to the hospital and put it back into place. I still feel some things that we need to clear up, but I’m gonna see a shoulder doctor on Tuesday and get some MRIs done and heal this thing.”

“I will be champion one day,” added Pico. “The road is a little bit rougher than I would like, but it’s all good. I’m in good spirits.“

Are you excited to see Aaron Pico return?