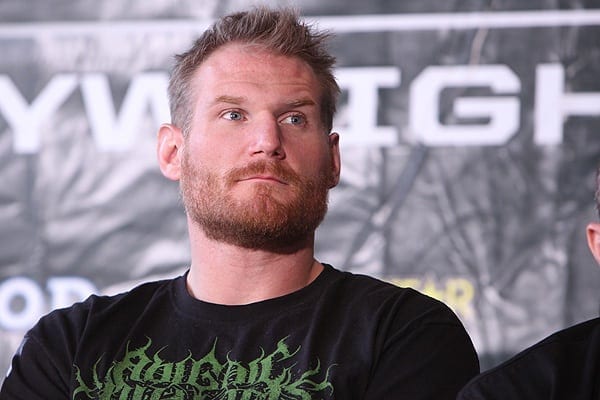 The UFC’s heavyweight division has been thrown for quite the loop in the past two days.

Yesterday (January 24, 2015) it was announced that former champion Cain Velasquez was out of his scheduled rematch with champion Fabricio Werdum at February 6’s UFC 196 due to injury. No. 2-ranked Stipe Miocic quickly stepped in to take on “Vai Cavalo”, but it was reported earlier today that the Brazilian was also pulling out of the bout due to an injury, leaving the promotion and Miocic in a limbo.

In the midst of all of the commotion, No. 8-ranked former divisional king Josh “The Warmaster” Barnett, who’s slated to meet Ben Rothwell at this weekend’s UFC on FOX 18, offered to take on Miocic for the title if need be:

“The Warmaster” continued on, saying that he’s completely healthy, and if it were up to him he would go five rounds for the title right now:

“For whatever reason, Werdum is hurt, Cain is hurt,” Barnett said, “Stipe stepped up and now Stipe doesn’t have a partner to dance with. I’ll dance with him. And then we’ll fight. And then maybe I’ll dance with him again afterwards. A nice slow one. When we’re all beat up and bruised and battered. When we’re vulnerable. That’s the time to go cheek to cheek on the dance floor.”

Although an interesting proposition, the idea is quite unlikely given Barnett’s upcoming fight, and the fact that Werdum should only be out for a few months.

“The Warmaster’s” opponent, Rothwell, also took to his official twitter account to voice his displeasure towards the idea:

‘ @UFCONFOX @ufc funny you would promote that-we are fighting in less than a week, on Fox- As if I wouldn’t take the fight? B…. please

What should the UFC do regarding not only UFC 196, but the heavyweight division in general?