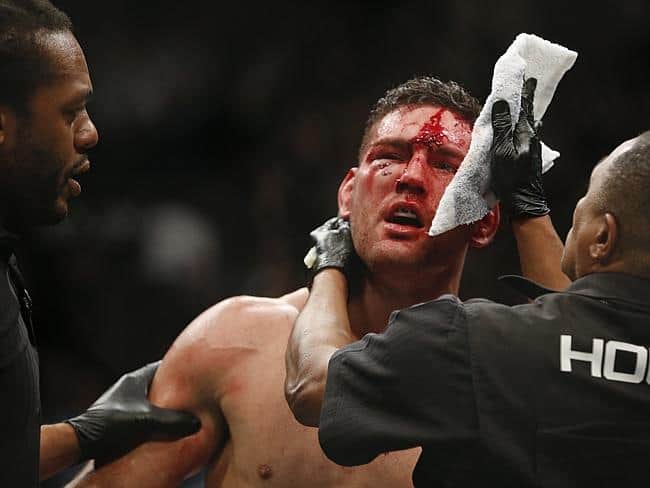 Former UFC middleweight champion Chris Weidman suffered the first loss of his professional career last month, surrendering his title in a brutal stoppage at the hands of Luke Rockhold at December 12’s UFC 194.

Remaining primarily quiet since the event, Weidman has finally opened up on today’s (January 11, 2015) edition of the MMA Hour, admitting that while it felt like a bad dream at first, he is now in a healthy state of mind:

Not only has he accepted the fact that he is no longer the middleweight division’s ruler, but Weidman is ready to grow from the loss, claiming that he’s anxious and excited for the changes that await him in the future:

“It was just a great experience for me. I could play back a million things in that fight I could’ve done differently, but I’m really happy I lost. I feel like if I would’ve won that fight, if I would’ve somehow figured a way to beat him up, I wouldn’t have the opportunity that I have now to grow as a fighter and truly reach my potential. Now I feel like I have the freedom to change things that I’ve wanted to change for years. You don’t want to fix things that aren’t broken, so that kind of stops you from make changes. But now I feel more free than I’ve ever felt to change the things and do things that I wanted to do without feeling like I’m cursing myself, so I feel great. I’m real excited about the future. I feel like it’s just going to create a whole different monster inside of me, and I’m excited to go out there and fight again.”

While the ex-champ undoubtedly has the raw physical skills to compete at the highest level, he most definitely may need to make some changes regarding his camp, noting that there was a lack of motivation and excitement leading up to his clash with Rockhold:

“It was a slow thing. You kind of feel, like these little things that are off during camp, and then you walk to the cage and feel a little off, and then you lose. It was surreal. It was just weird losing. But then shortly after, you realize: you know what, this is part of the plan. This is what was meant to happen. He was a better man that night, and there’s a million things in my mind that I know could’ve gone differently and I could’ve done differently during camp and in the fight.”

Weidman is correct in the fact that losing is simply part of this crazy sport in which we call mixed martial arts. At the end of the day, however, the Serra-Longo product lives with no regrets, but rather determination to come back stronger:

“But I have no regrets,” Weidman continued. “I really don’t. Because now… now I have the ability to come back better. If I would’ve won that fight, I don’t think my improvement from fight to fight would’ve been there. I think I would’ve stuck with the same things, the ‘if it’s not broke, don’t fix it.’ Being undefeated for that long of a time, you just don’t feel a need to change things. So I now I have that gift, to be able to just be free, and whatever I feel I need to do, I can do without second guessing myself.”

Despite the nature of the loss seeming somewhat dominant and one sided, Weidman was having some successes early on until his now infamous spinning back kick gave Rockhold a chance to capitalize. However, unlike most, Weidman credits his loss to much more than this failed kick attempt, adding in that he deserved to be beaten:

“I don’t regret doing that, because I’m happy I lost,” Weidman reiterated. “Everybody has been talking about the kick, and I do feel like I was winning the fight, but I was running on like two cylinders and I feel like I deserved to lose that fight, and I’m happy I did. I just felt like he was circling that way and I just felt I could go for a spinning back kick. He capitalized on it, he took me down. But that doesn’t mean it should be the end of the fight for me.

With the right attitude seemingly intact, Weidman appears to be poised for another run at gold. A rematch with Rockhold could indeed be a possibility as well.

Do you see the “All-American” reclaiming his spot on top?