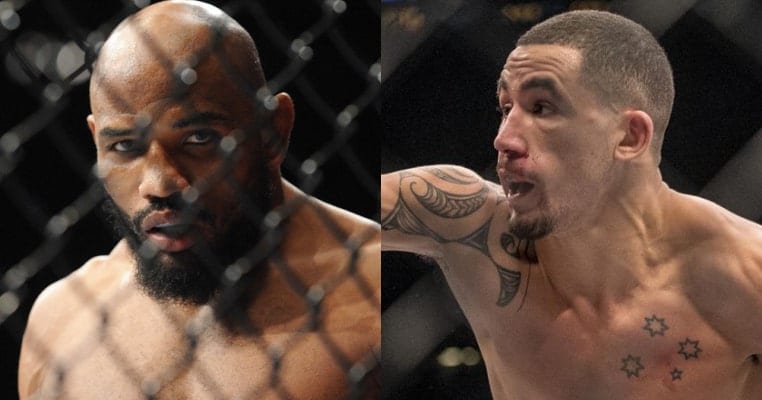 UFC 213, which is set to take place during International Fight Week on July 8, 2017 in Las Vegas, Nevada, was originally scheduled to be headlined by a bantamweight title fight between champion Cody Garbrandt and ex-titleholder TJ Dillashaw. A women’s bantamweight title scrap between 135-pound queen Amanda Nunes and surging contender Valentina Shevchenko is also slated for the card.

Recently, however, it had been reported that “No Love” was dealing with back issues, putting his title fight with Dillashaw in serious jeopardy. According to ESPN’s Brett Okamoto, who appeared on an edition of SportsCenter earlier tonight (May 23, 2017), Garbrandt has officially been removed from the card, with his fight with Dillashaw being scrapped.

The UFC clearly needed to fill a void on what is typically a marquee pay-per-view for the promotion and it did so in the form of an interim middleweight title fight, as top contenders Yoel Romero and Robert Whittaker will face off in the card’s co-main event, also per Okamoto.

Reigning middleweight champion Michael Bisping hasn’t defended his title since scoring a unanimous decision victory over Dan Henderson last October at UFC 204 in Manchester, England. Earlier this year, UFC President Dana White had announced that Bisping would next defend his title against returning former longtime welterweight champion Georges St. Pierre, but that bout has since fallen through according to White. Either way, Bisping, who’s currently dealing with a knee injury, won’t be ready to compete until the fall, leaving the promotion with no choice, but to move forward with the division.

Romero, the rightful No. 1-contender, has won an incredible eight straight fights, with six of those victories coming by way of stoppage. “The Solider of God” holds notable victories over Tim Kennedy, Lyoto Machida and Ronaldo “Jacare” Souza in addition to former champion Chris Weidman, who Romero finished with a vicious flying knee at UFC 205 last November in New York City.

Whittaker, on the other hand, currently sits at No. 3 in the divisional rankings and is riding a seven fight win streak of his own that includes four stoppage victories. The 26-year-old Australian-based contender dubbed “The Reaper” is coming off of back-to-back finishes over Derekn Brunson and Souza.

Many UFC middleweight contenders, most notably former champion Luke Rockhold, who hasn’t competed since shockingly being knocked out by Bisping at UFC 199 last June, have voiced their displeasure with the state of the division. Many have also criticized Bisping for the caliber of opponents he has elected to take on in his title reign thus far. The creation of an interim title, however, should appear as a step in the right direction and it should provide contenders with a sense of clarity in regards to where the division is headed.

What do you make of the UFC’s decision to book Romero against Whittaker?