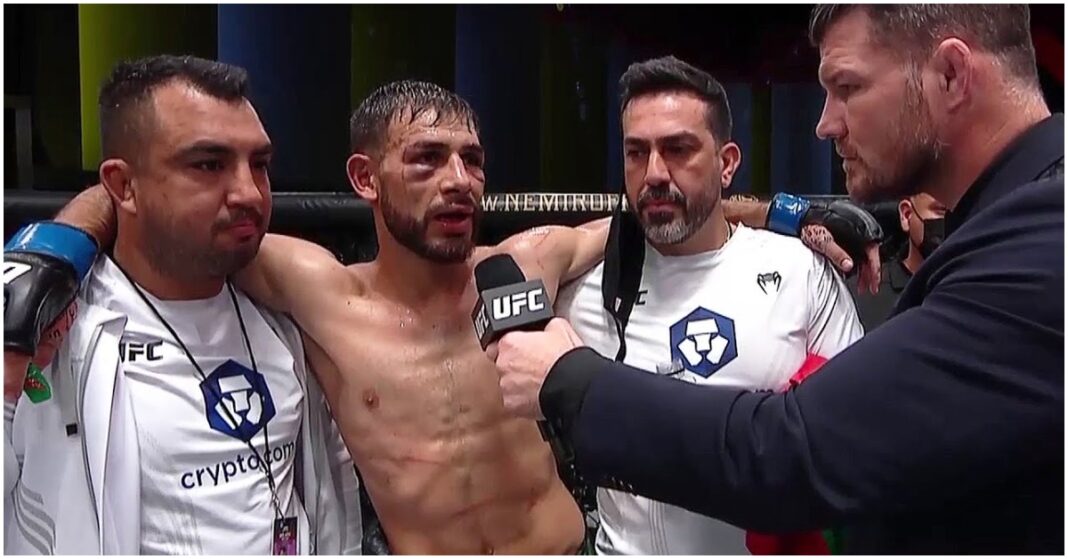 Yair Rodriguez was quick to thank fans for their well wishes and support following his epic main event match-up with Max Holloway at UFC Vegas 42.

‘Blessed’ was a huge favourite heading into the bout but was given all he could handle through five rounds by Rodriguez, who ultimately walked away with a loss on his record but a legion of new fan.

Rodriguez paid the price for his heavy kicking game at UFC Vegas 42 and was taken to hospital to get his heavily swollen and possibly broken foot checked out.

The Mexican fighter issued a post-fight statement from his hospital bed.

“Everybody thank you for being here for me and for my family,” Rodriguez said on his Instagram live. “I’m kind of f*cking f*cked up right now, I don’t even know what I’m saying. I just want to say, it was an amazing fight. Just keep moving forward guys. Thank you.” (Transcribed by MMA Fighting)

Yair Rodriguez Returns With Style After His Two-Year Layoff.

Before last night, Rodriguez hadn’t fought since October 2019. A mixture of injury problems, issues with USADA, and a failed match-up with Zabit Magomedsharipov contributed to his lengthy spell on the sidelines.

‘El Pantera’ is known for securing highlight-reel knockout finishes and has already beaten the likes of Dan Hooker, B.J. Penn, Chan Sung Jung and Jeremy Stephens during his UFC run.

Despite the fact he came away without the victory at UFC Vegas 42, Rodriguez gave what many consider to be a career-best performance against arguably the greatest featherweight fighter of all time.

At just 29 years old, he seems destined for big things in the not too distant future. First up, he’s got to heal up after taking so much damage in one of the best fights 2021 has had to offer.

Did Yair Rodriguez impress you at UFC Vegas 42?