LowKickMMA.com
Home Other Wyoming wrestler battles bear to save his teammate’s life 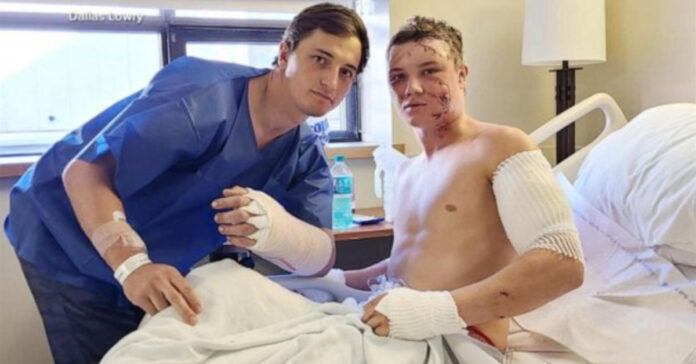 Kendell Cummings, a wrestler at Northwest College in Cody, Wyoming suffered injuries while fighting off a grizzly bear that attacked his teammate, Brad Lowry while visiting Shoshone national forest.

In a report by The Guardian, Lowry suffered a broken arm and puncture wounds in the initial attack which occurred after the pair startled a wild grizzly bear while searching for antlers shed by elk and deer.

“It shook me around and I didn’t know what to do,” Lowry told KSL-TV Monday in an interview from a hospital in Billings, Montana. “I curled up in a ball and it got me a few more times.”

Lowry’s teammate Kendell Cummings attempted to stop the attack on Lowry by screaming, kicking, and punching the bear. Cummings also attempted to pull at the animal’s fur. “I didn’t want to lose my friend. It was bad,” Cummings told the Deseret News. “There was a big ol’ bear on top of him. I could have run and potentially lost a friend, or get him off and save him.” As a result of his intervention, the bear turned its attention to Cummings.

The Grizzly Bear Then Delivered a Vicious Attack on Cummings

“It tackled me, chewed me up a bit, and then when it was done it wandered off, and I started calling out for Brady to make sure he was alright,” Cummings told KSL. After the initial attack, the bear walked about, but then quickly came back for another go at Cummings who was already reeling from serious injuries.

“The bear circled back around, and it got me again, chewed on me, and that’s when it got my head and cheek,” Cummings said. “And then it went away again for whatever reason.” As Cummings pulled himself from the ground, Lowry was able to walk to an area with cellular reception and call 911. Two other teammates helped bring Cummings down from the mountain while Lowry was able to walk unassisted. Lowry and Cummings were both admitted to Billings Clinic hospital where the latter underwent surgery for his injuries.

Wyoming wildlife officials confirmed that they will not attempt to capture and relocate or terminate the animal as it was a surprise attack and because there are many other bears in the area, making it difficult for them to determine which was the one involved in the attack.