LowKickMMA.com
Home UFC News What’s Next For Vitor Belfort? “The Phenom” Is Unsure 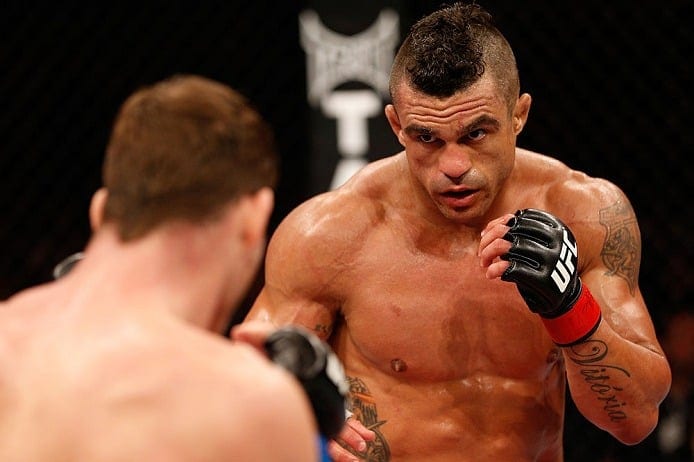 Despite being on the shelf since 2013 after the ban of his famously used testosterone-replacement-therapy (TRT), legendary Brazilian Vitor “The Phenom” Belfort was confident nonetheless going into his UFC 187 title fight against dominant middleweight champion Chris Weidman last night (May 23, 2015).

However, things didn’t go as planned for “The Phenom”. Belfort came out early in typical Belfort fashion, being explosive and throwing heavy leather. He even had the champion momentarily hurt after landing a body kick and a multitude of uppercuts. However, Weidman proved why he’s the elite of the elite at 185-pounds, scoring a takedown and quickly moving to mount where he used ground-and-pound to score a first round TKO victory over Belfort.

At age 38 and only having competed once over the past year and a half, the future is unclear for “The Phenom”. With the middleweight division being as stacked as it is, it would likely be very hard for Belfort to earn another title shot unless he can take out a few of the top contenders, which is doubtful based on his performance last night.

So what’s next for the controversial knockout artist? Does he have anything left in the tank, or could it finally be time for Belfort to hang up his gloves?

Speaking with MMAJunkie on his future, “The Phenom” was unsure of what’s next. He admitted that the fight did not go as he planned, and he may need some time to reset, and plan his next move:

Despite the rivalry between the men, which resulted in Weidman getting in Belfort’s face at the weigh-ins, the Brazilian has nothing but respect for the champion, noting that he was the better man:

“I saw my finish, but he’s the champion,” Belfort said. “He took it. It was a bad night. He was the better man tonight. That’s where it is.”

Would you like to see “The Phenom” give it one more go, or did last night prove that it’s the end of the road for one of MMA’s most controversial stars?