LowKickMMA.com
Home UFC News Werdum On Title Picture: It’s Either Me Or Velasquez 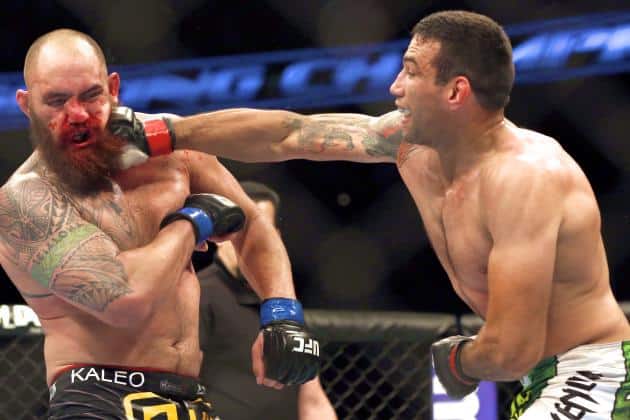 After Stipe Miocic successfully defended his heavyweight title for the first time via first round stoppage against Alistair Overeem at last weekend’s (September 10, 2016) UFC 203, it’s currently unclear who will get the next crack at the champ. There does, however, appear to be multiple options.

Former champion Fabricio Werdum, who Miocic knocked out last May, recently got back in the win column at UFC 203 as well, picking up a decision victory over Travis Browne. Another ex-champion in Cain Velasquez, who Werdum submitted in June 2015, also recently got back to his winning ways, bulldozing Browne at July 9’s UFC 200. Finally, No. 4-ranked Junior Dos Santos is coming off of an impressive win over Ben Rothwell, although he’s also in the final stages of recovery after undergoing shoulder surgery.

As far as Werdum is concerned, however, the next title shot should be given to either him or Velasquez:

“There’s two people I think who clearly are in the title mix. Me or Cain Velasquez. It’s between the two of us. We must wait for what the UFC will decide. Junior Dos Santos is coming back from an injury, he just healed a while back and I don’t know if it would be interesting to put him up for a title shot right away. I can’t really answer that. We have to wait for the UFC to speak up.” Werdum told Combate.

Ironically enough, Velasquez recently called out Werdum for a rematch so perhaps the UFC has other plans regarding the title picture.

As for JDS, the Brazilian slugger said that he wasn’t all that impressed with Werdum’s UFC 203 performance, but “Vai Cavalo” isn’t too surprised by that:

Who would you like to see receive the next shot at Miocic?