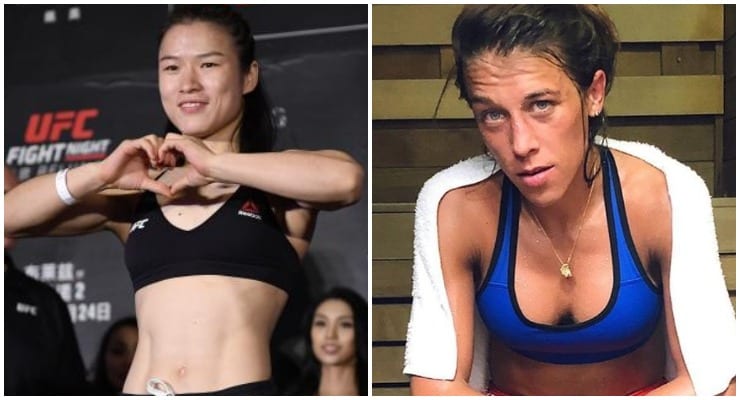 The pair are set to square off in the co-main event at UFC 248 on Saturday. Zhang will be making her first defence of the title she won in August 2019. Jędrzejczyk on the other hand will be looking to regain the title she impressively held for two years between 2015 and 2017 before losing to Rose Namajunas at UFC 217.

However, Jędrzejczyk might not even get another shot at title if Zhang’s suspicions are to be believed. The first ever Chinese UFC champion is growing increasingly concerned that her Polish challenger will miss weight due to her “plastic surgery”.

Reporter Adam Hill revealed the concerns on social media after speaking with the champion he said. “Zhang Weili says she is concerned with Joanna Jedrzejczyk making weight because of her “plastic surgery” #ufc248”

Zhang is of course talking about the breast implants Jędrzejczyk had done last year. Since her surgery Jędrzejczyk has successfully made the strawweight limit in her last fight against Michelle Waterson.

At the time though it was reported the former champion was struggling to make weight and had proposed a catch-weight bout which was ultimately turned down by Waterson. She was also considering taking on different opponents as ‘Karate Hottie’ refused to negotiate on the issue according to Combate.

Despite the pre-fight drama Jędrzejczyk made the 116 limit and won the fight in impressive fashion. The Polish striker dominated top contender Waterson over five rounds in the UFC Tampa main event.

The champion will be making her first title defence since she spectuarly captured UFC goal in August 2019. In front of her home fans Zhang starched Jessica Andrade in just 42 seconds to end the Brazilian’s brief reign as queen.

Do you agree with Weili Zhang about “plastic surgery” being an issue during Joanna Jędrzejczyk’s weight cut?