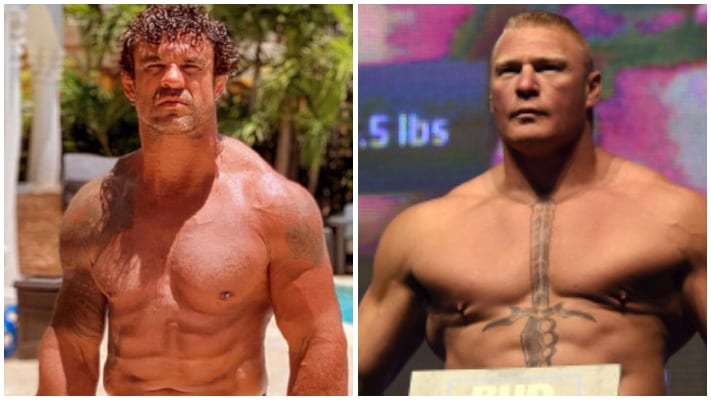 Vitor Belfort is the latest high profile fighter to call out former heavyweight champion Brock Lesnar who is currently a free agent after opting against re-signing with the WWE.

Belfort, who is currently signed to ONE Championship called for out Lesnar during a recent interview with Submission Radio.

“Brock Lesnar, I think you’re a fraud. But I’ll give you a chance. I think you’re a fraud. If you really want to fight with me, let’s go bare hands, me and you. We put the gloves, we go combat, you know? I know you’re a very tough man. I heard you’re a grappler, but I’ll fight you, man. I’ll fight you any day, any time, and I think that’s a legendary fight right there. But I think he’s a fraud in MMA. But, you know, he comes from WWE, he knows how to sell, but for MMA, he doesn’t like to get hit. And I’m telling you, I can hit him pretty hard. So, let’s do BMA, me and you. You’re a big man, I got you. I’m willing to fight big men, man. I’m not scared. The king of the jungle is the Lion, not the Elephant. So, Brock Lesnar, you’re right down my alley, my friend.”

Belfort went on to explain exactly why he thinks Lesnar is a “fraud”.

“Fraud because he never paved the way, man. He never fought MMA. He went there and he got a chance. He fought for the belt after one fight. Listen, I tell this to everyone, you listen to me very clearly, the only sport in the world, the only sport in the world where you can come in from any other sport, is MMA. An MMA fighter can never cross to football. They can never cross. Michael Jordan tried to cross from baseball and he couldn’t make it. Why? Because you have a process to make it. So, that’s what it is. We need to understand that MMA, a combat sport. Even YouTubers can fight. Even like if you’re a hockey player you can come and fight in these rules. That’s why it’s good, man, that’s what makes MMA so possible. You don’t need to have a career, you can make a career and you can become a persona and people can like you and they can buy you. Look at what Kimbo Slice did. And some make it. I take my hats off to the gangster, Masvidal. Because he really paid his way, man. People don’t realise, that guy paid his way. He deserves it. So, I respect fighters that really paid their way. They deserve to be in the spotlight. But, you know, I understand he can be in the spotlight of WWE. So, that’s what I mean. A fraud for MMA is this. He doesn’t deserve it, but he sells, man. Let’s go Brock. I’ll put my hands on you. That would be nice. I’ll make him pink.”

Do you want to see Vitor Belfort vs. Brock Lesnar?