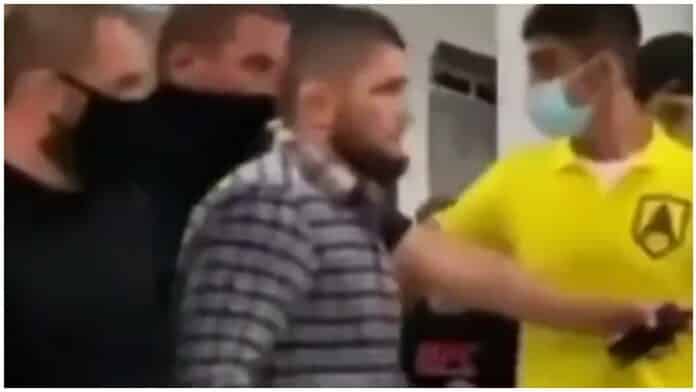 Khabib Nurmagomedov has found himself in the press a lot recently.

From his controversial remarks concerning the point of ring girls in Mixed Martial Arts to being the subject of nasty attacks on Twitter, it is definitely fair to say that “The Eagle” has not enjoyed the quietest of retirements following his brilliant win against Justin Gaethje in Abu Dhabi at UFC 254.

Now though, Khabib has endured a shocking near-attack by a “fan.” Whilst Khabib was being escorted through a security passage, and was noticeably limping, the person in question attempted to break the security barrier and sprinted towards the Dagestan native. It should be noted that the context of this incident is currently unknown, as is what actually happened during the attempted altercation.

As already alluded to, Khabib is enjoying his retirement from the fighting and has been extensively promoting his MMA organization, Eagle FC. He also recently revealed that he has bought shares in the UFC; a very smart business move from the Russian indeed. He remains a true fan favourite (the above case being an obvious exception). Regardless of the cause or the motivation behind the attempted attack, it does indeed serve to remind that even the toughest fighters on the planet require strong security presences.

What do you think the “fan” was trying to do to Khabib Nurmagomedov?