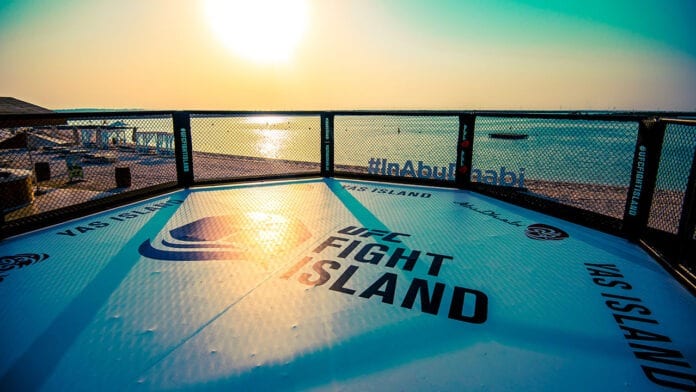 We finally have some footage from inside the arena on UFC Fight Island, where Saturday’s UFC 251 card and three subsequent events will occur on Yas Island in scorching hot Abu Dhabi.

Take a look at this awesome first hand footage from Guilherme Cruz of MMA Fighting:

As you can see above, Fight Island has a pretty standard set-up, not unlike the one we’ve seen at recent events at the UFC Apex facility in Las Vegas. This might come as a surprise to some casual fans that have seen the pictures and videos advertising the Octagon outside on the Island itself. If you take a look at the temperatures in Abu Dhabi, during the day, the “feels like” is usually between 120-130 degrees and at night the temps are still in the 100s.

While some fans certainly thought this was the deal, it just doesn’t seem possible to hold these high level fights outside, both a dangerous risk and seemingly unfair to the fighters themselves.

The good news is, reports seem to say that inside the arena itself, it is extremely well air conditioned, which is very good news for all involved, especially the fighters.

This is an awesome setup and seems like a huge win for the UFC and Dana White. We’ll see how the conditions play out on Saturday night.

What Are Your Thoughts On The Fight Island Setup?