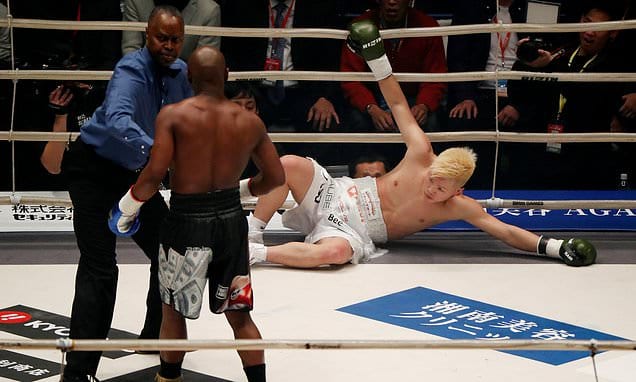 Floyd Mayweather smashes Tenshin Nasukawa in their exhibition bout at RIZIN 14 on December 31st from the Saitama Super Arena in Saitama, Japan.

The boxing legend was able to score the TKO win after the corner of the rising prospect threw in the towel after the first round.

After the fight, Mayweather talked on the microphone about how he is still retired as a professional boxer, and this exhibition was all about entertainment. Highlights of this contest have surfaced online, which you can check out here:

Before this fight, Mayweather was last seen when he beat former UFC lightweight and featherweight champ by TKO last year.

On the flip side, Nasukawa came into this fight after he took on Taiki Naito in a highly-anticipated rematch at RISE 129. Nasukawa beat Naito by first-round TKO. Before that, he came off a victory over Rizin bantamweight champion Kyoji Horiguchi. This came by unanimous decision. He’s gone 4-0 in MMA while he holds an undefeated record of 28-0 in kickboxing. It’s impressive, to say the least, but he couldn’t hang with Mayweather in this exhibition.