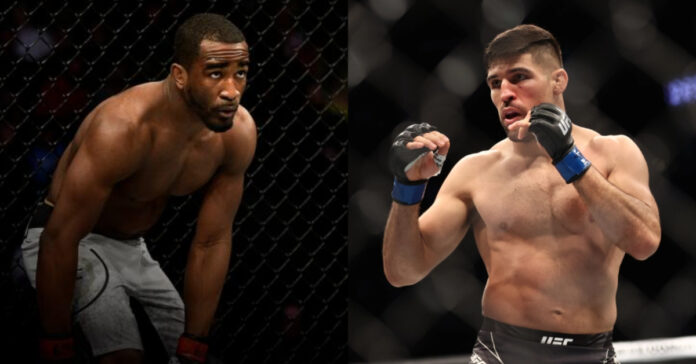 UFC Vegas 59’s co-main event is shaping up to be an all-time welterweight classic, as Vicente Luque prepares to take on Geoff ‘Handz of Steel’ Neal.

Vicente Luque recently sat down with LowKickMMA to discuss his upcoming fight with Neal. Luque’s most recent performance was a loss to Belal Muhammad, who stifled ‘The Silent Assassin’s’ lethal striking with a something wrestle-heavy approach. However, against Neal, Luque believes he has found an opponent willing to go blow for blow with him in the striking department. Speaking with Mike Owens, he stated that:

“He just pushes forwards. I think that, in a way, is a similar style to me. It’s keeping it simple but going at it. Fighting, actually fighting. That’s what I think is his biggest tool, and at the same what excites me the most about this fight. I know that he’s going to come to fight and that’s something I enjoy. That’s a challenge for me. I know he’s gonna want to take my head off, he’s gonna want to knock me out. Because he trusts his power, he trusts his game. And that’s the same as what I’m gonna be looking to do in that fight.”

Vicente Luque does not that Neal’s southpaw stance may offer him some issues, but it is nothing new to ‘The Silent Assassin.’

“So this is a fight that excites me. I think the trickiest thing he has going for him is the fact that he’s a southpaw. But I think maybe it’s going to be the sixth or fifth southpaw that I’m gonna fight in the UFC… It’s always tricky but it’s something that I’ve lived before.”

“I do anticipate that we’re going to strike. I do think that his style and who he is, at least as a fighter, when I watch him I like to watch his fights, I think he’s not the guy to shy out from a good striking battle. So I think he will come to try and knock me out and see what’s gonna happen.”

Who are you backing in the upcoming fight between Vicente Luque and Geoff Neal?