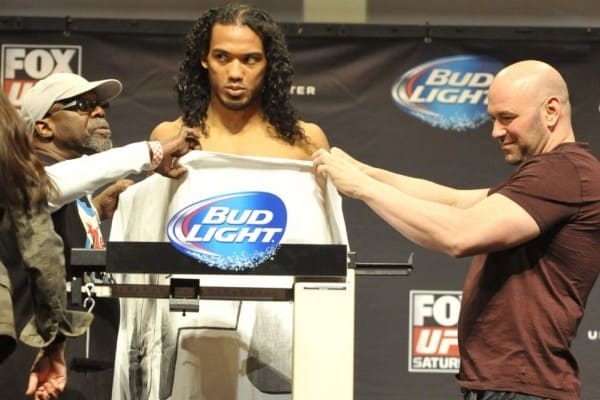 When a fighter makes weight, often times they didn’t do so in a pretty way. The mental fortitude to withstand causing such harm to the body is only something a true professional can put up with.

Speaking in terms of major MMA organizations, fighters have 24 hours after they make weight before their fight (give or take a few hours depending on where they are slated on the fight card). Often times, fighters will carb load like a marathon runner the night before and drink pedialyte like a pediatrician would recommend to a baby. One of the most successful ways of putting on weight is through IV rehydration – but it may have already seen it’s last day.

According to Zane Simon of bloodyelbow.cow, the United States Anti Doping Agency (USADA) has agreed to ban the use of IV rehydration in pre-fight proceedings, as it is in the same category as genetic doping and blood transfusions.

“What’s important to remember is the WADA list is the list of prohibited substances. So, those are what most people consider the drugs, the performance enhancing drugs, but it’s also the prohibited substance and methods. And there are certain methods, like an IV infusion that you just mentioned, or gene doping or autologous or homologous blood transfusion, where you take someone else’s blood in advance of a bout and it gives you oxygen carrying capacity and recovery capacity and all sorts of benefits. It would be, by the way, game changing benefits.

So, the IVs are allowed under certain circumstances under the WADA prohibited list. You know, if you’re in the hospital, clinic, having surgery. If you need it outside of those, you have to apply for a TUE. It’s not, as you just indicated, not prohibited in most, or any that we’re aware of, licensing commissions. So, there’s going to be some education, obviously, around that. The purpose for it was to ensure… And you may… I don’t know how closely you’ve followed our investigation into cycling, but you saw it used a lot in cycling. Because, putting a bag of saline over 50 ml, for example is the rule, would potentially mask or alter the blood testing that was done. And there were examples in there where athletes would put a bag of saline in their arm when they saw the blood collectors coming to collect their blood. And they just delayed reporting for 15 min. So, that was really the purpose behind the rule.”

In the past, it was almost certain that fighters did this type of punishment to their body while cutting weight, knowing that they could use IV rehydration to fuel back up. Now that this method seems to be off the table, what will fighters resort to now?

MIKE DOLCE, I SEE YOU ON SPEED DIAL!