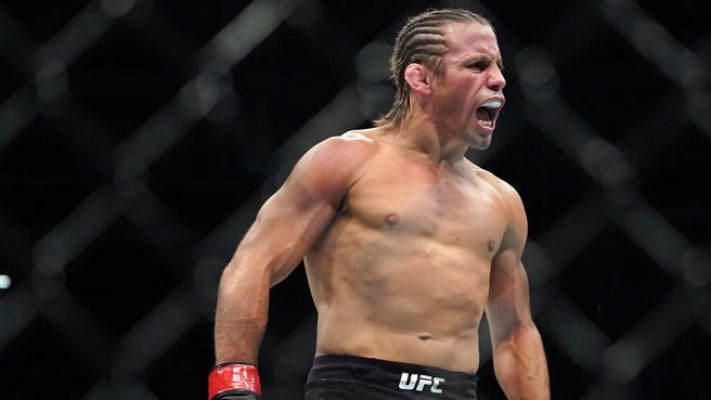 UFC Bantamweight legend Urijah Faber has been away from the octagon since December 2019’s loss to Petr Yan.

Now, the 42-year-old Faber is once again open to a potential comeback inside the cage.

“I was definitely not planning on the whole shutdown of the entire world and, at that time, having a baby on the way and a newborn,” Faber told The Schmo. “I fight because I love it, it’s a good time, the entire experience. Not having a crowd, I was definitely not going to fight. Now that the crowd’s back, I wouldn’t put it past.”

While Faber remains on the sidelines, coaching several current fighters in the UFC, that hasn’t stopped his fellow bantamweight contenders from calling out the well known name in Faber. While Faber has certainly had some intriguing names call him out in the past year, the name that comes to mind for his return to the cage is none other than Marlon ‘Chito’ Vera.

“I’ve heard maybe seven or eight guys that have called me out, maybe asked for the fight, some respectfully, some disrespectfully,” Faber said. “Chito Vera, he’s one of the guys. That would be an interesting matchup. It’s funny, the whole thing that happened with him and Song Yadong. He was all bent out of shape about that fight. Backstage his whole team was ranting and raving and I said, ‘Guy, you can always do it again,’ and he goes, ‘Why don’t you fight me?’ So I said right in front of Song, ‘You don’t want to fight Song again?’ ‘Oh I do, buh-buh-buh.’ But he hasn’t said a word about Song. That would be a good one though, old Chito Vera.”

Vera lost to Faber’s Team Alpha Male teammate Song Yadong in May 2020 and has been adamant about a Faber fight ever since.

“I would probably, if I was going to compete, need to get back into Rocky mode and it would take me a couple months, but I’m not opposed to getting in a good old fist-fight,” Faber said. “Fun, you get paid, part of your passion, so don’t count the idea out. I’ll have a sit down with Sean Shelby and maybe Dana White and see if they think it’s a good idea to get back in there but I’m always game.” (Transcribed by MMA Fighting)

Faber has competed for world titles in the UFC on four different occasions and was inducted into the UFC Hall of Famer in 2017 with a career record of 35-11.

Do you think we’ll see Urijah Faber make another comeback? How would a Faber-Vera fight play out?