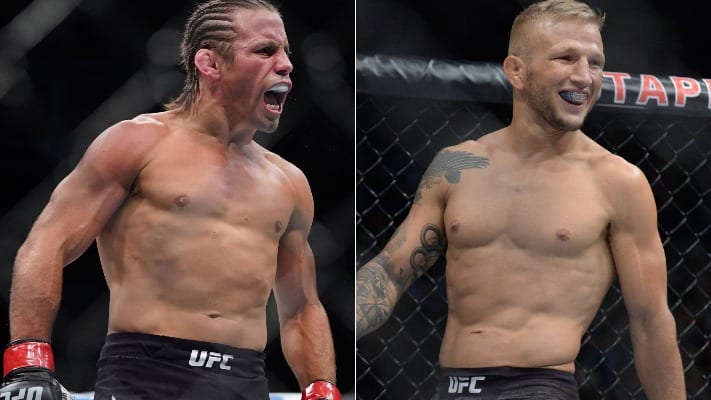 Urijah Faber and TJ Dillashaw have the perfect backstory to make for a great fight inside the Octagon.

The former friends and teammates-turned-rivals have traded insults over the past several years since Dillashaw’s ugly exit from Team Alpha Male. Recently, Faber came out of retirement to pick up a first-round knockout win over Ricky Simon at UFC Sacramento. “The California Kid” is making one last run at the 135-pound title that has eluded him his entire career.

Speaking to MMA Fighting’s “A-Side Live Chat” recently, Faber was asked about a potential clash with “The Viper” down the road. Dillashaw is currently serving a two-year United States Anti-Doping Agency (USADA) suspension for the intentional use of EPO – a banned substance – to assist in his weight cut to 125 pounds. Faber explained why the matchup does not interest him at the moment:

“I really don’t want to fight TJ. I mean, I really don’t. Especially – you know, the odds are in his favor. He’s like a scientist when it comes to – you know – what he puts in his body.

“And I know that. I’ve heard – whatever he’s doing, I’ve heard about it for years and I’ve never really delved into it, but he’s also younger than I am and he’s been training his butt off. But I love a good fight, and the grit and the intensity and the focus and the backstory is good on that one. But I’d rather test myself for the best.”

Instead, Faber is focused on a possible matchup with current 125 and 135-pound king Henry Cejudo. “The King Of Cringe” recently underwent shoulder surgery, so any potential meeting will have to wait until the first quarter of 2020. However, Faber would likely need to pick up one more win to earn a title nod.

If he does, the Team Alpha Male frontman would love to test himself against a fighter as accomplished as “Triple C”:

“A guy that’s a fair competitor, a guy thats accomplished a lot in this sport, a guy that has done a lot – I mean no one has actually done what Henry’s ever done. He’s the youngest guy from America to get the Gold Medal, he beat some of the best fighters ever in Demetrious Johnson and TJ Dillashaw.

“He also has a win against Joseph Benavidez, who, in my opinion, is one of the uncrowned champions. That’s a guy that I know for sure has never done any PEDs. And, has fought – who knows who has been doing what throughout this time. So, Henry’s beat some very tough guys, and what an opportunity to go test yourself against a historic dude, and vice versa, that’s why he’s called me out.”

What do you think about Faber’s comments regarding a possible Dillashaw fight?