LowKickMMA.com
Home MMA News Urijah Faber Believes Conor McGregor Will Be Happy To Give Up 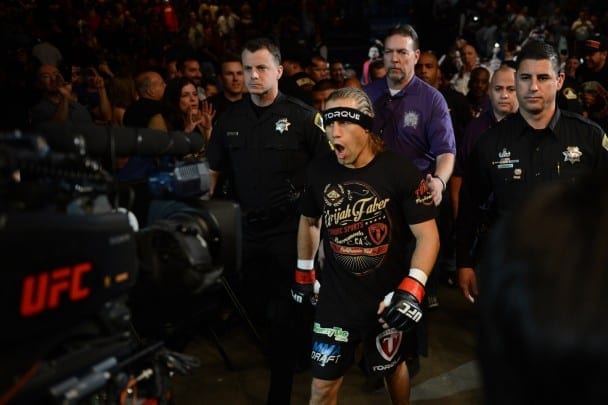 There’s a veritable army of fans and supporters who have quickly jumped to Irish sensation Conor McGregor’s side during his meteoric rise over the past two years, all of whom believe that ‘Notorious’ will triumphantly wrest the belt from longtime champion Jose Aldo in the main event of July 11’s anticipated UFC 189 from Las Vegas.

Former World Extreme Cagefighting (WEC) featherweight champion Urijah Faber is not one of them, however.

Discussing the pivotal bout with FightHub.TV (via Bloody Elbow), Faber brought up an aspect of McGregor’s game that we haven’t seen in the Octagon due to him being undefeated in the UFC. ‘The California Kid’ cited the Irish star’s prior two losses to Artemij Sitenkov, which came by kneebar in McGregor’s third fight, and his most recent loss to current UFC lightweight Joseph Duffy, which came by arm-triangle choke in 2010.

According to Faber, despite McGregor’s considerable skills, he seems like a fighter who gives up when the going gets tough:

“He’s a tough fighter but there is some give in him. Don’t get it twisted; there are guys who have never given up. I think he’s had to submit a couple of times. When push comes to shove and life is on the line, the guy would be happy to give up.”

In Aldo, McGregor will be squaring off with a Brazilian jiu-jitsu black belt who’s rarely had to show his submission skills in the cage. But if it would mean neutralizing McGregor’s thunderous stand-up attack, then we may just see the decorated champion’s ground game come into play at UFC 189.

McGregor certainly got under the champ’s skin during the recent 10-city UFC 189 World Championship Tour, and he believes that’s enough to result in Aldo ‘looking for an exit’.

Faber, on the other hand, believes that ‘Notorious’ will do just what he’s accused Aldo of:

“I think that Aldo is going to win that fight.”