UFC on Fuel TV 8 will take place this Saturday from the Saitama Super Arena in Japan. For a cable television card, this event has great bouts from tops to bottom. Japanese MMA has always been known for its action-packed bouts, and this night should provide the same. Bryan and I put our picks together for the main and co-main events:

Mike Drahota: Brian Stann versus Wanderlei Silva may not be the high-profile main event we’ve seen from the UFC in recent months, but it does have the potential for fireworks. Silva is obviously in the twilight of his illustrious career, but that hasn’t stopped him from predicting a third round knockout of the heavy-hitting Stann. I don’t doubt that Silva has a lot of fight left in him. Still, I see Stann utilizing the age and power difference to his advantage. Brian Stann via 1st round (T)KO.

Bryan Fontez: What does Wanderlei Silva have left to prove? That’s a question only he could answer for you. But to be honest, after slowly declining in speed, skill and his former ability to take punishment, I have no interest finding out. In his prime, Silva would eat guys like Stann for breakfast based on sheer aggression coupled with an iron chin. But that time has passed and now every time I see Wanderlei fight I pray he doesn’t get hit. With that said, Brian Stann will hit him in the face, Wanderlei will fall down and Bruce Buffer will declare Stann the winner via an absolutely brutal 2nd round KO. 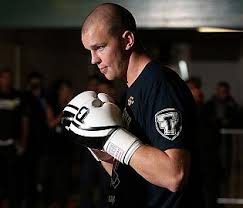 Mike Drahota: I’ve been quite impressed with the recent performances of both Stefan Struve and Mark Hunt. Struve has the tools and size to most definitely challenge for the Heavyweight title one day. It could be soon, but Mark Hunt is quite the large roadblock. His trademark power has been on display in a big way. Come Saturday, though, I think that Struve’s extensive jiujitsu background will be the X-factor here, as Hunt’s submission defense has never been world-class. Stefan Struve with a 1st round submission is the pick.

Bryan Fontez: This is an interesting match up with yet a gain an insane height discrepancy. Mark Hunt is a proven MMA veteran whom has very strong striking skills and possibly the best chin in combat history. Although, his ground game is, and always has been suspect. Struve on the other hand is the largest Heavyweight in MMA history in terms of frame and height and yet oddly enough, Jon Jones reach is still longer (figure that one out). Struve however has never properly used his size the way that he should, the day that he does he’ll be truly unstoppable. I wanna say Mark Hunt via KO, but something tells me Struve has game planned to get this into the later rounds. And if that happens I think we’ll see him get a submission in the 3rd.