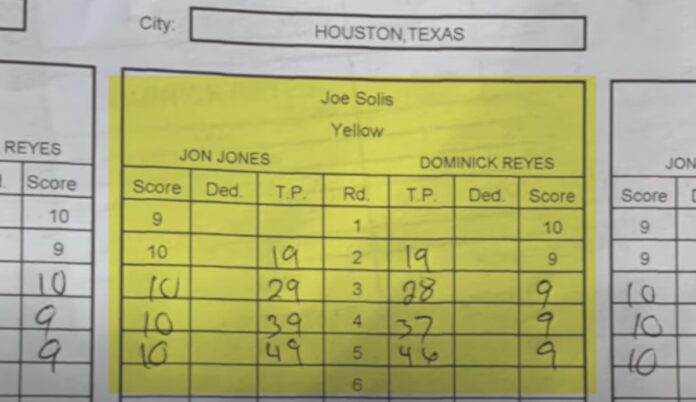 The UFC scoring system is a topic that has been discussed and debated for years in the MMA community. It is how MMA fights in the UFC are scored and many have criticisms about the system.

What is the UFC scoring system?

The UFC scoring system is the 10 point must system used for scoring fights. It was originally created by the World Boxing Council (WBC) in 1968.

A practical scoring system that helped judges in scoring close fights. Fighters that won a round would receive a score of 10.

The fighter that lost a round would either receive a score of 9 or lower. This depended on if they were outperformed, knocked down, or completely dominated.

This system was so effective that it has been the scoring system for boxing ever since. Then when MMA became a legitimate sport, the systems would also be used within that sport.

How does the UFC scoring system work?

Within the UFC scoring system, judges are supposed to score fights by the following criteria from the unified rules of MMA.

Of course striking is one of the main things judges look at when scoring an MMA fight. The fighter that lands the most strikes or gets knockdowns generally wins the round.

Other ways a fighter can win a round is by landing takedowns, attempting submissions, control, and of course damage. The fighter that accomplishes one or more of these points will receive a score of 10.

When a match goes to a decision, there are 3 possible decisions that could be reached within the UFC scoring system.

The decision can either be:

Unanimous decisions are pretty self explanatory. This is when all of the judges think the same fighter won a match and have the same scorecard.

When this happens, a fight is ruled a unanimous decision.

A majority decision is where all of the judges are in agreement on who won, but have different scorecards. Two judges can have a 29-28 score and another could have a 30-27 score for the same fighter.

In this scenario, a fight is then declared a majority decision.

Split decisions happen whenever two judges see a fighter won and the third judge thinks the other fighter won the bout. This results in a fight being declared a split decision.

In the UFC scoring system, there are different ways fighters can be deducted points in their match. Committing one of these penalties can drastically change the outcome of a fight.

Those illegal actions include:

Usually offending fighters are given a warning on their first offense and then deducted a point if they repeat the act. But if the illegal action was blatant, the referee has the authority to immediately deduct a point.

How do draws happen in the UFC scoring system?

While they aren’t common, draws occur within the UFC scoring system. Here are the scenarios of how a draw can occur.

The first scenarios of a fight resulting in a draw can occur if a fighter winning a fight commits an infraction. If they’re landing strikes and end up landing an illegal strike or eye gouge, they could be deducted a point.

When this happens the round will most likely be scored 9-9 tie. If one fighter wins one round and their opponent wins another, this means the fight will probably be a draw.

The other scenario that a fight could end in a draw is if a round(s) has no clear winner. Sometimes, there are rounds where neither fighters clearly won them.

They were so evenly matched that one or more judges couldn’t decide who won. In this case, the round is scored 10-10 and could result in a draw if each fighter takes the other rounds.

Flaws of the UFC scoring system

It was designed for boxing

The UFC scoring system or 10 point must scoring system was originally designed for boxing. It works within boxing, because boxing is a less dimensional sport than MMA.

In boxing, it’s easier to score a fight and keep track of which fighter is winning. The fighter who lands the most punches or scores knockdowns wins the round and gets a score of 10.

MMA being more dimensional is harder to score under these parameters. Not only strikes, but takedowns, submission attempts, and octagon control makes using this system more difficult to use for MMA.

It’s not so much the UFC scoring system, but the judges that use it that are the problem. The sport of MMA is nearly 30 years old, but is still plagued by uneducated judges.

Many judges are actually boxing judges appointed to work UFC events by the state the event is held in. They grade MMA fights like boxing matches, which has led to many incorrect decisions.

Going along with the 10 point system being made for boxing, it was also made for fights with more rounds.

In boxing, a judge may interrupt a round differently or incorrectly. When it’s a boxing match, where it can be a 10-12 round fight, this makes less of a difference.

Since MMA fights are only 3 to 5 rounds, scoring errors are amplified. One scoring error can change the whole outcome of a fight.

Not only costing a fight a win, but robbing them of a win bonus.

There have been numerous ideas to improve the UFC scoring system, but there have been specifically 3 ideas constantly brought up. These three are detailed below.

In Pride FC, their system revolved around who was winning the last minutes of a round. Not the whole round as a whole like is done in the UFC scoring system.

The logic behind this system revolves around if the fight was no time limit bout. If it was, then the fighter winning at the end of the round should win the whole round.

It’s an interesting idea, but discredits 90% of what happened in a round.

Another common addition that has been called to be added to the UFC scoring system is open scoring. This practice allows you to see what the judges scored each round after they happen.

It sounds like a good idea to be more transparent with scores, but does have its flaws. The biggest being outside forces influence the opinions of the judges.

If a judge sees the other judges scores is different from theirs it could influence how the score the other rounds. No matter if it’s right or wrong.

The fans could also sway a judge if they are able to see what the judges scored each round. By the fans’ reactions it would put pressure on the judges to score a round how they saw it.

The last addition that many call to be added to the UFC scoring system is a criteria for damage. It sounds like it should be added into criteria for winning a fight and judges actually do factor this in.

A good example of damage being factored into a fight is the bout between Jose Aldo and Rob Font. Rob Font landed more strikes, but Aldo clearly won the fight by landing more strikes that hurt Font.

Although the flaw in adding damage into the criteria for winning a fight is defining what damage is. The definition of damage is very subjective and each judge would have a different interpretation of what damage is.

Let’s say a fighter is winning nearly every moment of a fight, but gets a bad cut from an opponent’s strike. By adding damage to the criteria, a judge could give the round to the fighter that lost nearly the whole round. Just because they landed one strike that cut their opponent.

There’s an argument for adding damage to the criteria of winning a fight, but it’s definition is just too subjective.