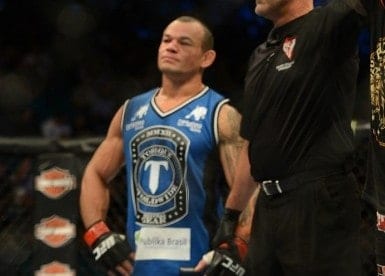 When news broke yesterday (Sun., December 28, 2014) that No. 12-ranked UFC lightweight Michael Johnson would face No. 6 Edson Barboza in the co-main event of next February 22’s UFC Fight Night 61 from Porto Alegre, Brazil, fans found out just when “The Menace” was finally going to return to the octagon.

Johnson had been out of action since picking up his third consecutive victory by defeating Melvin Guillard by decision at March’s UFC Fight Night 37. He was supposed to face former Strikeforce champion Josh Thomson at July’s UFC on FOX 12, but an injury reportedly forced him out.

Tonight, however, the real reason for Johnson’s extended absence has been revealed, as the UFC has released an official statement explaining that The Ultimate Fighter (TUF) 12 veteran had been put on hiatus due to a pending domestic dispute from April:

UFC lightweight Michael Johnson was ineligible to compete in the UFC organization following his arrest regarding a domestic dispute in Palm Beach County, Florida in April 2014. Given that the allegations against Johnson constituted a potential violation of the UFC Fighter Conduct Policy, the UFC organization temporarily barred Johnson from competition pending the completion of a third-party investigation. Following a thorough review and investigation—including personal interviews with Johnson and independent confirmation that he has satisfied all obligations required by the UFC—Johnson is once again eligible to compete and will begin training for his next fight at UFC Fight Night: Evans vs. Teixeira in Porto Alegre, Brazil. The UFC will continue to monitor Johnson’s status. He must fully comply with the UFC Fighter Conduct Policy and all other contractual and additional obligations in order to continue competing in the UFC.
All UFC athletes are required to comply with the UFC Fighter Conduct Policy they signed along with their fight contract. The UFC organization will not tolerate any violation of its Fighter Conduct Policy. The organization is committed to thoroughly investigating all allegations and taking the appropriate action when warranted.

It was not clarified as to whether or not the charges had been dropped or disputed in a court of law, but according to MMA Fighting, Johnson was charged with one count of Battery – Touch or strike by the Palm Beach Sheriff’s Department during the early hours of April 9.

With the announcement, Johnson, who previously defeated Joe Lauzon and Gleison Tibau before beating Guillard, will look to resume his assault on the stacked UFC lightweight division when he faces one of its best in Brazil this February 22.