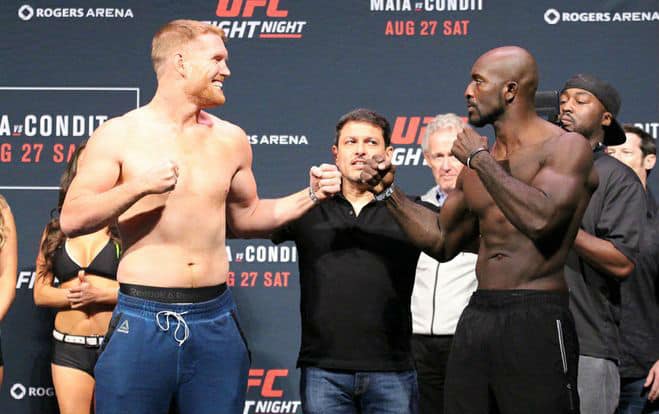 It’s once again fight day here at LowKickMMA, and the talent on display tonight (Saturday, August 27th, 2016) will come in the form of UFC on FOX 21. Headlining the card are Carlos Condit and Demian Maia, but there’s a whole bunch of great fights also taking place on the preliminary section of the card.

Sam Alvey and Kevin Casey met in a middleweight bout closed the preliminary card on FOX. A fun fight that made Alvey look very impressive. In round 1, after a feeling out process, Casey clinches with him and puts him up against the fence. Alvey was landing some shots, but Casey was keeping control. Not ton of action in this round. Alvey landed a knee strike to the head to close the round. In round 2, They had a nice exchange to begin the round. Alvey dropped him with a left-hand midway through the round and unleashed strikes on Casey. Alvey let him up moments later. Alvey dropped him again with 30-seconds left and rained down strikes from half guard. Casey tried to stay in the fight but couldn’t, and the fight was stopped.

Shane Campbell and Felipe Silva in a lightweight bout opened the FOX  preliminary bouts. Another quick fight. They had a nice exchange early in the round. Silva pressed him and landed some good combos that eventually dropped Campbell. Silva finished him on the ground for the win.

Thibault Gouti vs. Chad Laprise in a lightweight bout finished off the UFC on FOX 21 Fight Pass preliminary card. This one did not last long at all. Laprise clinched with him about a minute into the round. Laprise landed a big elbow and then they separated. Laprise dropped him with a right hand then swarmed him with strikes to end the fight.

Opening the UFC on FOX 21 Fight Pass prelims was Jeremy Kennedy vs. Alex Ricci in a lightweight bout. Not the most entertaining fight in the world. In round 1, Ricci came out and clinched with him right out of the gate. Kennedy pushed him off, and we went back to striking. Ricci landed a series of knees while back in the clinch. Kennedy was bleeding from his nose midway through the round. Kennedy took him down and got a brief double-leg takedown but Ricci got right back to his feet, and they clinched to end the round. In round 2, Kennedy came out and went for another takedown, but Ricci was using his hips correctly and stayed on his feet while in the clinch. Kennedy worked him down to one knee and eventually got a brief takedown, but Kennedy can’t keep Ricci down. In round 3, once more, Kennedy clinched with him right away and was looking for a takedown. When not defending the takedown, Ricci was landing some good shots. Kennedy got a takedown with just seconds left in the round and landed some shots from guard to end the round. Kennedy was given the unanimous decision victory by the judges.