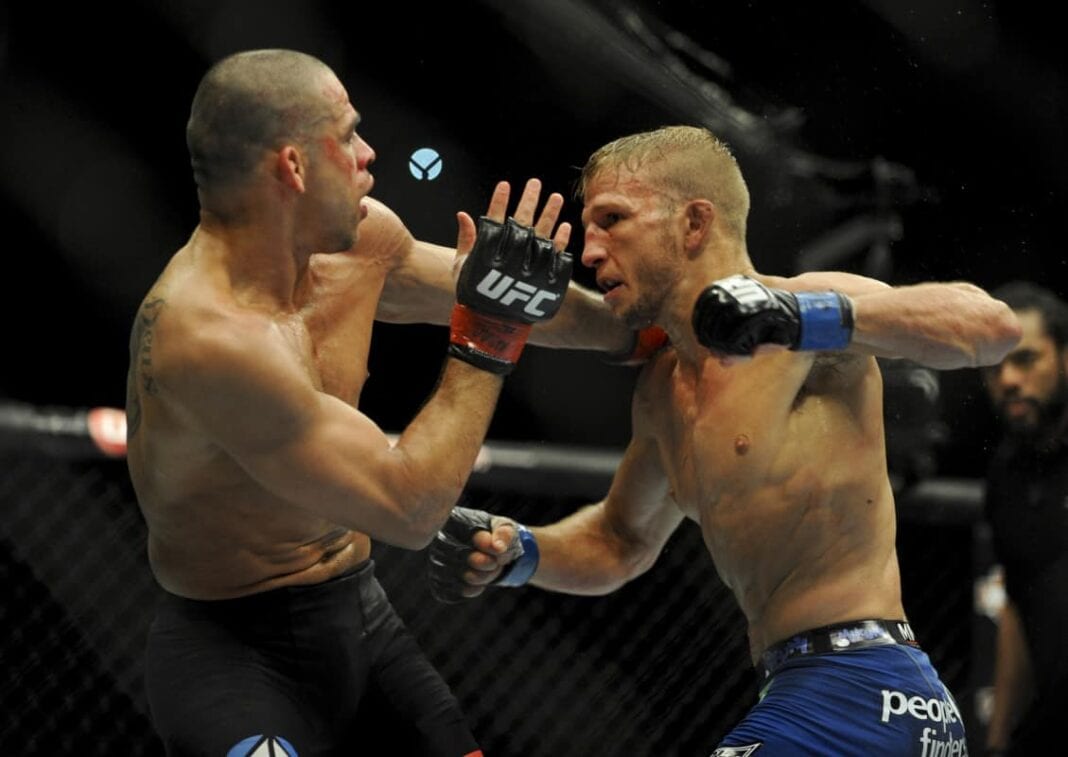 We are now just a few days away from fight night, as UFC on Fox 16 is set for this Saturday night (July 25, 2016) live on big Fox from the windy city in Chicago, Illinois. The card seems to be a very intriguing one, and the main event is no different as it features a highly-anticipated, and long-awaited rematch for the bantamweight title, as reigning champion TJ Dillashaw puts his strap on the line against ex-boss Renan Barao.

Prior to meeting Dillashaw at UFC 173, Barao had an unheard of 32-fight unbeaten streak, and was being considered one of the top fighters on the planet. However, the Team Alpha Male staple Dillashaw came in and defied the odds, absolutely destroying Barao, and scoring one of the biggest upsets in mixed martial arts (MMA) history.

However, that doesn’t mean that Barao won’t come back stronger, as the two are clearly world class athletes. Without further ado, check out the LowKickMMA TJ Dillashaw vs. Renan Barao II breakdown below:

This is a tough category to call for me because in my opinion, striking is Barao’s strong point. The Brazilian uses a Muay Thai like, flat footed stance, but he is insanely powerful, and also has a wide variety of strikes, specifically some brutal kicks. With eight knockout wins to his name, “The Baron” is quite dangerous on the feet, but Dillashaw is also a special sight to watch strike, and the current champion did in fact batter Barao in this category during the first fight.

Training under legendary striker Duane “Bang” Ludwig, Dillashaw has truly been able to take his striking to an elite level. He has some of the best footwork in the sport, and moves extremely fluently, throwing crisp and precise combos. “Killashaw” also switches stances effortlessly, always keeping his opponents in check.

The current champ lands an insane 5.56 significant strikes per minute, and also has five knockouts to his name, one of course over Barao. At the end of the day, I believe that Dillashaw has proven himself to be the superior striker. 60-40 Dillashaw

Here’s another difficult category. The champion is a former Division I wrestler, with a decorated background, and serious takedown skills. He lands 2.02 takedowns per contest, with an accuracy rating of 45.16%.

There’s no doubt in my mind that Dillashaw is the better wrestler, but the margin decreases due to Barao’s outstanding takedown defense. Just like his teammate, featherweight champion Jose Aldo, “The Baron” is extremely hard to takedown, and it’ll be difficult for “Killashaw” to get the fight to the mat. The advantage definitely goes to the champion, but Barao’s takedown defense makes it a bit closer. 55-45 Dillashaw.

This is the area where I believe the former champion has the biggest advantage. A black belt in Brazilian jiu-jitsu under the legendary Andre Pederneiras, Barao has 15 submission wins to his name as opposed to Dillashaw’s three.

Dillashaw has no formal rank in jiu-jitsu, and has never been submitted, but that may be Barao’s best chance to win. I’m not sure I see the champion getting submitted, but “The Baron” definitely has the large advantage. 60-40 Barao

Do you think the rematch will play out similar to the first fight, or will Barao regain his 135-pound title?