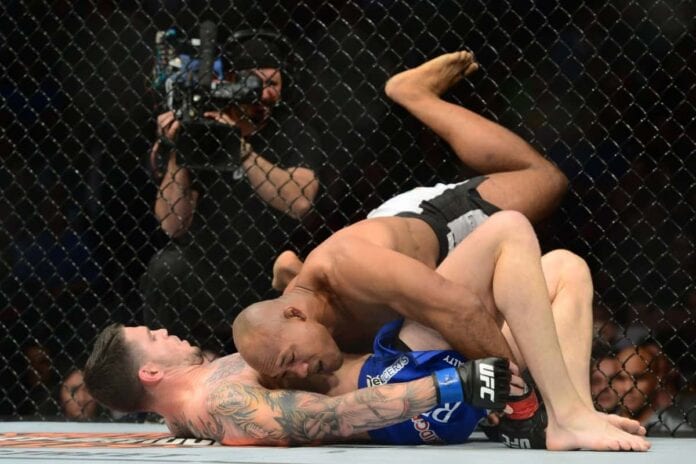 Top-ranked UFC middleweight Ronaldo “Jacare” Souza was planning on facing No. 6 Yoel Romero for the next title shot in the co-main event of last night’s (Sat., April 18, 2015) UFC on FOX 15 event from the Prudential Center in Newark, New Jersey.

Instead, he was backed into a lose-lose situation when he was left with no other option but to rematch old foe Chris Camozzi after The “Solider of God” was forced to withdraw with a significant knee injury.

Jacare, who had already submitted Camozzi with ease in his UFC debut back at UFC on FX 8, truly had nothing to gain, but he had to take care of business nonetheless. He did so impressively, dispatching Camozzi via verbal submission by locking on a tight armbar following a slick wall walk to transition into side control.

Souza still believes that the title shot will deservedly be his, but with Luke Rockhold submitting Lyoto Machida in the UFC on FOX 15 main event and breathing down champion Chris Weidman’s neck, unfortunately he may have to get a ninth straight win to secure his coveted shot at gold.

Either way, that may be a big deal to Jacare, because he looks to be as dangerous and dominant as he ever has been. Check out the full fight video highlights of his dominant win over Camozzi below: