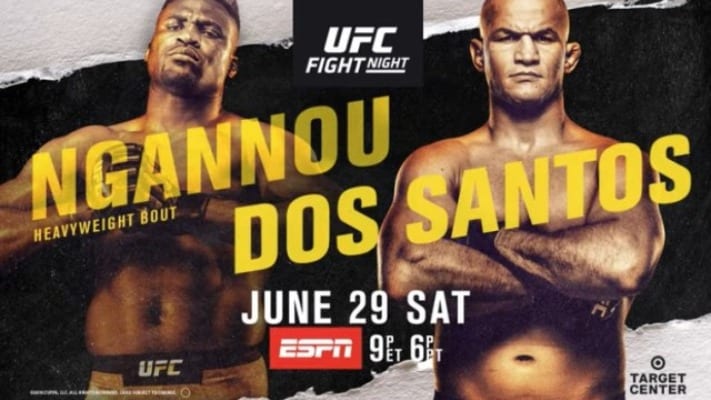 In the main event, heavyweights Francis Ngannou and Junior dos Santos will collide. The winner could very well be looking at a title shot next. Check out our LowKickMMA UFC Minneapolis staff predictions for the bout here:

Both men come into this fight with impressive win streaks. However, the difference here is Ngannou possesses some freakish ability unlike any other the sport has ever seen. All it takes is one little connection, and “The Predator” is sending you to the shadow realm.

That’s what he recently did to Curtis Blaydes and Cain Velasquez. “JDS” will be no different. I expect Ngannou to connect hard and early, putting the Brazilian out cold.

Both fighters enter this fight on a winning streak and those wins are extremely impressive. They seem to have found their groove once again, which makes for an entertaining fight.

Yes, both fighters have impressive knockout power and there’s a great chance that this fight ends in someone being woken up by the referee. I think this is a classic case of the reality not living up to the hype. I see JDS going out and wrestling with Ngannou, who has struggled in that department. JDS grabs the decision win.

While my head tells me Francis Ngannou should get the knockout, I have a gut feeling Junior dos Santos will come away with the win. He has really impressed me with his recent three-fight winning streak and showed that he still has a lot of power with his win over Derrick Lewis.

It’s not on the same level as Ngannou of course, but Dos Santos has more tools in his shed, and as of late, seems to be better as the fight goes on. If he can survive the first round, I think JDS takes this and earns another title shot.